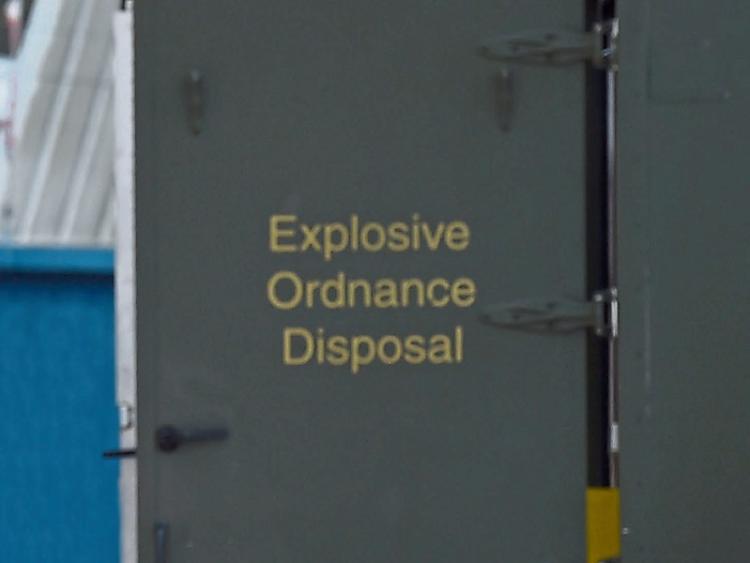 The defence forces attended the scene

DOZENS of Askeaton people were forced to evacuate their homes on Sunday night after a pipe bomb was discovered in a residential estate.

The explosive device was discovered near Friary Court and William Street in Askeaton, which left the residents of these areas stranded outside their homes between around 10:30pm and 2:30am.

A nearby resident, Kevin O’Rourke, said that he and many others are fearful in the wake of the discovery.

“My two children were only 10 yards away from that bomb, and there were around eight children within about 10 yards range of the bomb, asleep that night,” he said.

“They are two very bright kids who go to school every morning, and they’re sleeping within 10 yards of that scene,” said Mr O’Rourke.

“It was terrifying. I am fearful for my two children.

“My youngest didn’t realise the gravity of the situation, but it is a serious situation,” he added.

Mr O’Rourke told the Limerick Leader about an elderly neighbour living in the estate, who has been too afraid to return home after the scare.

“I’m not afraid to talk up here. Askeaton shouldn’t have to put up with this, and I’m very mad and very angry over this whole situation. I’d never expect this to be in Askeaton.

“If there’s unrest going on, take it somewhere else. We in Askeaton don’t want it,” added the resident.

A garda spokesperson said that the homemade bomb was found on a footpath.

A spokesperson for the Defence Forces also confirmed the discovery in a statement.

“In the early hours of the morning, an Army Bomb Disposal Team rendered safe a viable Improvised Explosive Device near Askeaton, County Limerick.

“The Defence Forces deployed the Army Bomb Disposal Team on request from An Garda Síochána, after the device was found. A cordon was established in the surrounding area and a number of houses were evacuated to ensure the safety of the residents.

“The Army Bomb Disposal Team arrived at 1.30am and rendered the device safe at the scene. The scene was declared safe at 2.15am.

“Material of an evidential nature was handed over to An Garda Síochána to assist them with their investigation," added the spokesperson.

It is understood that nobody has been arrested, and Gardai are appealing for information from the public to assist the investigation.