RUNNING FOR A GOOD CAUSE:  GARRYOWEN GRANDFATHER RAISES €50,000 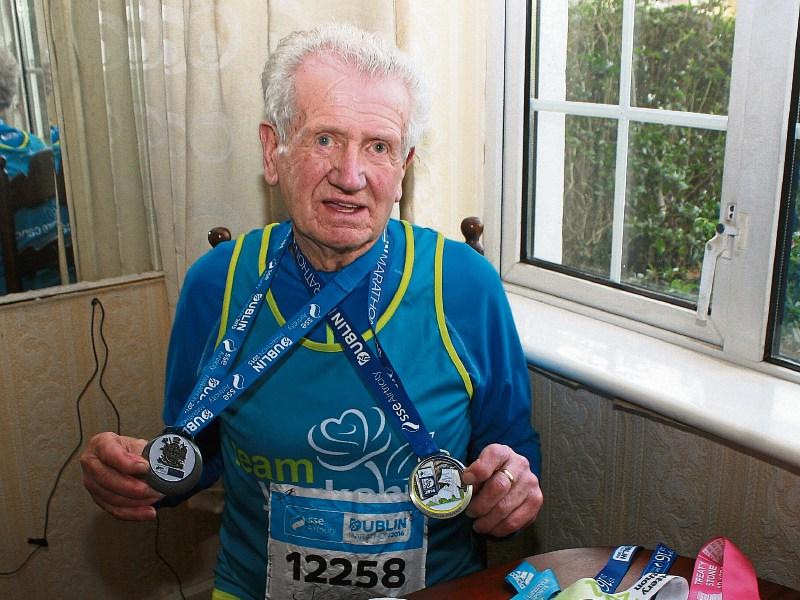 Phonsie Clifford with some of his many medals Picture: Michael Cowhey

AT 86, Limerick marathon man Phonsie Clifford has no intentions of hanging up his runners, or putting his feet up.

Alphonsus or Phonsie as he is known, the father of well-known fitness trainer Richie ‘Mr Motivator’ Clifford, won the over-85s section of the Great North Run in Newcastle in the UK this year.

More than 600 people aged over 80 took part, and once again, Phonsie led the group.

Speaking to the Limerick Leader, Phonsie confirmed that he has now raised nearly €50,000 for cancer services in the UK and Ireland, but predominantly for Milford Care Centre in Castletroy.

He only started running aged 62, and in the past 20-odd years, he has now completed over 40 marathons – much to the astonishment and admiration of his peers.

While it now takes the father of five some six to seven hours to complete the 26.2 miles of a marathon, he said running is his “disease” and he can’t, or won’t, stop anytime soon.

When he was previously featured in the Limerick Leader five years ago, he said that two cans of Guinness each evening and two boiled eggs every morning helped keep his stamina high.

“I drink a few cans of Guinness every evening, but I’m still not able to do what Phonsie does,” wrote one letter writer to the editor thereafter, much to his amusement.

Phonsie – who worked as a butcher with Peter Henshaw abattoir on the Dock Road – has since weaned himself off his modest Guinness indulgence, and now enjoys a little nip of Jameson whiskey and a drop of red lemonade each night before going to bed.

The grandfather of 13 has even donated much of the prize money he has won in winning races over the years. He ran four races this year, including the marathon in the Cook Medical Great Limerick Run, the Dublin Marathon alongside his son Richie and his wife Carmel, the Ballycotton 10-mile race in Cork, and the Great North Run in Newcastle.

He was earlier this year featured in a documentary entitled Super Fit Seniors on Setanta Ireland. His next aim is to complete the popular Boston marathon, but he lamented that there is fierce competition to claim a spot.