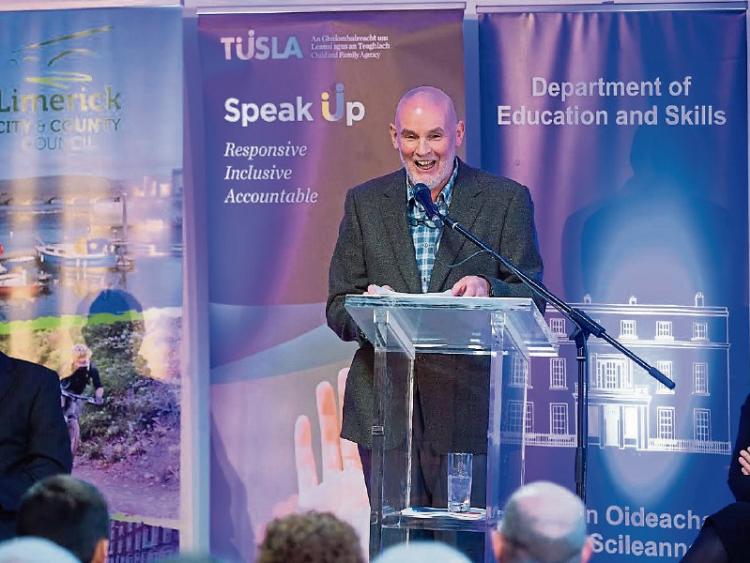 SOUTHILL-based priest Fr Pat Hogan has said that the “real work of Regeneration began” when peace and freedom from crime came to Limerick city.

In a powerful speech delivered by the O’Malley Park resident, Fr Hogan detailed the “dark days” of crime in the city, and how Limerick overcame its social struggles since the programme began in 2007.

He was speaking at Innovate Limerick on Roxboro Road on Friday morning, where Minister for Housing Simon Coveney launched a 320-page progress report on the Limerick Regeneration Framework Implementation Plan.

Speaking before the Minister, Fr Hogan gave a vivid insight into the murders, burning of houses and poverty that affected the community during his years as parish priest.

“I was never like other residents because I could always leave, I never bought a house, I never brought up a family there. So I wasn’t like other people in the sense that thousands of others had invested everything they had there, raised families, enjoyed their lives, had great memories, and enjoyed until things began to go horribly wrong.

“And after that, a few more years, many other people were murdered, so we had a lot of funerals. And what was also amazing was the amount of anniversaries of young people who were killed, murdered. But thankfully, we have had none of that for some years.

“The second thing that caused absolute panic was the challenge of people being burned out, especially around Keyes Park. I knew all those families. And it didn’t matter, whether you were in a walking frame or in a cot, your house could be targeted,” he explained.

He said that he was amazed at how “quickly I got used to gunfire”.

He added that children in the four Regeneration areas “paid an enormous price” during the dark days.

He said that children had to be taken from school yards after the sound of gunfire, checking the streets to see if it was safe for them to go home, families sleeping on the landing in case shots came in through the window.

“We actually had no idea what was going on in children’s lives. What they were seeing or watching at home, what was being done to them, what they were being involved in. And one of the great phrases of that time was: ‘A child has no language, but behaviour.’ And there was lots of behaviour.”

But he says those days are over.

“I am sorry for reminding ourselves of the dark days of when Regeneration began, but I think it’s important for those who don’t know or are quick to forget where we have come from. Because we never want to go back to those days again. We want to make sure that such tellings never happen again.

Welcoming the Regeneration report, Fr Hogan, who served as parish priest in Southill for nine-and-a-half years, said that the first success of Regeneration was when “people felt listened to”. He further commended the multi-agency groups who are working together to tackle problems and delivering ambitious projects.

He added: “And just knowing that one life has been changed brings so much joy. Knowing that a guy who has grown up in such difficult circumstances, and knowing that that guy is going into a future that he wouldn’t have had - that brings so much great joy. And there are so many stories like that. There is a lot to celebrate.”

To date, approximately €260m has been spent on Regeneration in Limerick.