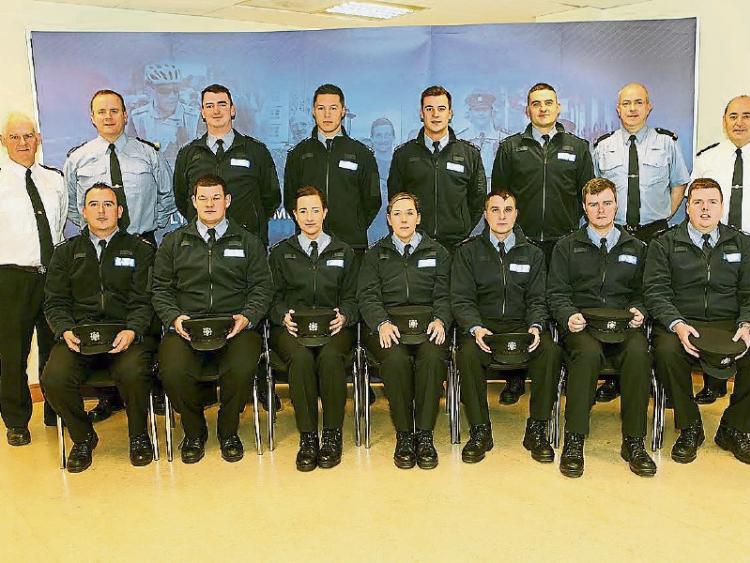 The new garda recruits for Limerick

THE HEAD of the Limerick garda division has said that county stations will benefit from the new tranche of recruits, and that there will be stronger visibility on the streets of Limerick.

It is understood that a number of the new gardaí will be redeployed to county stations, following their training at Henry Street and Roxboro Road.

Chief superintendent Dave Sheahan and Superintendent Derek Smart escorted members of the media to the boardroom, where they greeted the new force for the first time.

As the boardroom door pushed open, each eager recruit regimentally rose from their seats to salute their new chief. Beckoning them to remain seated, Chief Super Sheahan shook each hand, and convened their first meeting as members of An Garda Síochána.

Of the nine men and two women, six have been assigned to Henry Street garda station, and five have been stationed at Roxboro Road garda station. Warmly welcoming the recruits during a 10-minute talk, Mr Sheahan said that Limerick is a “fertile ground” for new gardaí to learn and develop, adding that he was “thrilled” with the new graduates. It is understood that this is the largest number of new recruits “in many years”.

Sgt John Flanagan explained that the gardaí will be assigned a tutor garda and supervisory sergeant every day while they are on duty. They will undertake a BA in Applied Policing, accredited by University of Limerick.

The Limerick garda division made a bid to the Garda Commissioner and to Minister for Justice Frances Fitzgerald to take in a number of gardaí, following the loss of 10 members to Templemore in recent months.

Discussing the training, Chief Super Sheahan said: “What’s most important for us is to make sure that the values we hold in An Garda Síochána so highly are those same values that we can give to those who are training here. And anywhere in Limerick is a very fertile place for learning and development, but my role is to make sure that they get all the learning and the development, because at the end of the day, they are going to be the leaders of our future.”

And though there is a “different landscape” in comparison to high crime levels in Limerick a number of years ago, the policing issues remain the same, he said.

“And what we have got to do now is build on some of the successes that we have had over the years. And, as I have said to the students already, the strength in my perspective over the seven years that I have been here now, has been the ability to forge links with the communities in which these people operate. And for me, that is the whole key to the ethos of policing; the way in which we can develop those links, and that is what I will be instilling in our new students for the coming years.”

The division chief is hopeful that Limerick will boost from another tranche of garda recruits from Templemore in February or March, which will allow for a “further redistribution of personnel”.