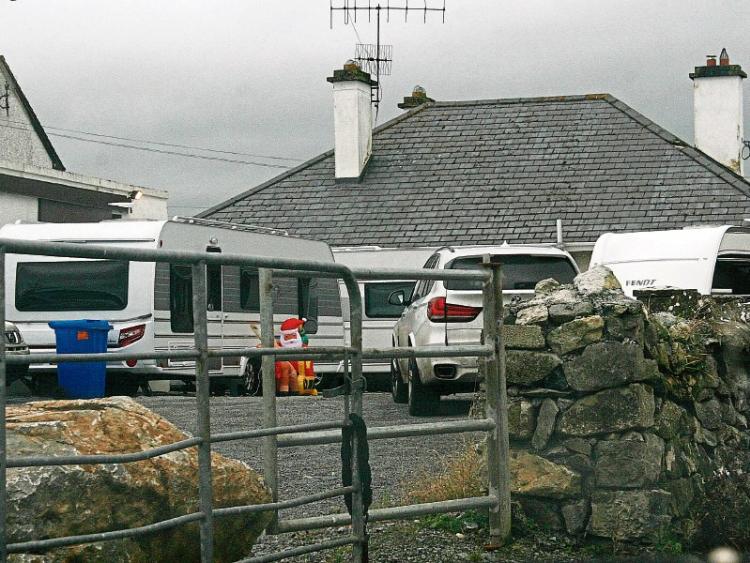 The scene at Iniscouch, Rathkeale this Wednesday, before the caravans were moved

TWO of the three caravans parked illegally behind a house in Rathkeale were moved by 11am this Thursday morning. The third was allowed to remain in place with the stipulation that nobody lives in it.

But the three members of the Boswell family, Alfie, Margaret and Roger Boswell, Iniscouch, Rathkeale were not present in court for the adjourned case, brought against them by Limerick City and County Council.

At a court sitting in Newcastle West on Tuesday, Judge Mary Larkin ordered them to move the caravans by this Thursday morning or face a fine of up to €5000 each and/or six months imprisonment and up to €5000 in costs.

Solicitor for the council, Will Leahy this Thursday also asked that the terms of the enforcement order issued in December last year be complied with. This stipulated that the Boswells had to remove the hard-core material and replace the grass on the site behind their house.

“We didn’t press the issue last year,” he told the judge. “You were satisfied once the caravans were removed.”

But because there had been a recurrence, he continued, he was now asking that this be complied with so that caravans cannot be parked there in the figure.

The Boswells’ legal representative, Aaron Desmond, asked that they return to that element on the adjourned date of January 3.

“The way I see it, we played ball, for want of a more legal expression, with these people last year,” Judge Larkin said. “They did not play ball.”

“Your clients made fools of the council and the legal process,” the judge continued. “I cannot allow that.”

However, she agreed to revisit the issue of restoring the site until January 3 when she would also revisit the issue of costs and fines. But she marked the matter with liberty to apply in any court in the district. She also warned Mr Desmond to have his clients in court on that date so that they could give sworn undertakings in court.

Mr Desmond that that Roger Boswell would be on his honeymoon that day.

“I am not excusing anybody on any date,” the judge said but added that if matters had been complied with, “they won’t have a difficulty.”

On Tuesday Judge Larkin had said, “The problem we have now is the same as last year… and telling me we have a planning application as a sort of magic wand to solve the problem doesn’t work. It is not as if they don’t know this. We had all this out in the court.”

Last year, members of the Boswell family were prosecuted by Limerick City and County Council for illegally parking their caravans on a hard-stand they had created behind their house in Iniscouch. “The council sought costs of €4,242.78 at that time but  a compromise was reached,” solicitor for the council, Will Leahy reminded the judge.

“You were willing to give these people a chance and Alfie and Margaret Boswell  gave an undertaking to have all caravans removed bar their own and not to live in them. You agreed to adjourn all summons to February 2017 to get us over this Christmas period and with liberty to apply,” Mr Leahy said.

But fresh complaints had now been received by the council, the court heard, and on Monday, three caravans were parked on the hard-stand with people living in them. Summons were re-issued on Alfie and Margaret Boswell and Roger Boswell for breach of an enforcement order but the council was unable to reissue summons to two others.

Under the regulations, Mr Leahy explained a person is entitled to park a caravan on their property for nine months of the year provided they do not live in it.

The site on which the caravans sit was originally a green field site, the court heard,  but had been hard-standed without planning permission.

A planning application to retain the hard-stand area was refused and an application subsequently made to demolish the house and build a new one which would be more appropriate for the family.

There is a current application  for retention of the hardstand area for temporary use.

Pleading for his clients, Aaron Desmond BL, said it was a case of necessity. His clients had invested money and effort to rectify the situation, he argued, by applying for planning permission to demolish the house and build a new one. It was envisaged that the situation would not recur, he said.

“I allowed them time to come off the site. I did not say they could go back on again for permitted use at a later stage,” Judge Larkin said. “That was not the intention.”

“It is just a numbers issue,” Mr Desmond said, explaining that the existing house was not big enough. He also pleaded  that one of the family members was pregnant and due to give birth shortly.

“Can’t she go and live in the house?” asked Judge Larkin.

“Wasn’t it envisaged last year they would go and live in the house?” she continued.

Mr  Desmond pointed out that his clients normally reside in France and Spain and return to Rathkeale for Christmas as part of their cultural tradition. But Judge Larkin asked: “How can tradition overrule the law?”

“It is not fair on the neighbours of this site,” Mr Leahy said. “They choose to come back here for Christmas.”

It was a blatant breach, he continued, and made a mockery of the process. And he asked the judge to apply the maximum fine of €5000 on each summons and costs of €5000.

Mr Desmond replied that the actions were not ‘blatant’. They knew they could not keep doing it, he argued and the planning application for a new house was intended to remedy that.

There was a short recess to allow the defendants to consider their choice: to get off the site or face the consequences put by Mr Leahy.

“They understand the situation,” Mr Desmond said when the court resumed. They would undertake to have the caravans removed by December 16. The pregnant woman was due to go to hospital on December 14 or 15, he said, and his family would then be in a position to move.

“Why would you bring a woman about to have a baby to live in a caravan in some other country than where you normally live?” Judge Larkin asked. But she added that if she left it to December 16, “ I would be asked to remove a new baby”.