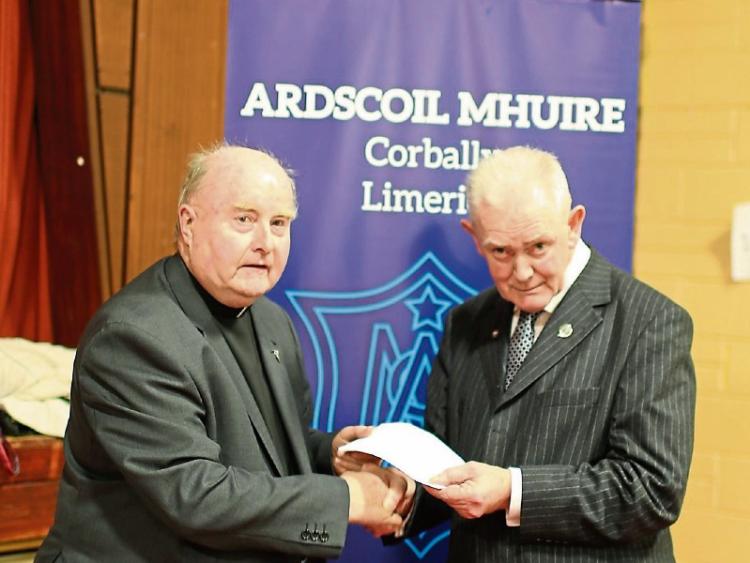 HAVING celebrated Mass on approximately 25,000 occasions over the course of his 51 years as a priest, Canon Donough O’Malley has opened a new chapter in his religious life.

After almost 15 years as a parish priest in St Mary’s parish in the city, Canon O’Malley has bid farewell to parishioners and has relocated to the Dominican parish of St Saviour’s, St Joseph’s and Our Lady of Lourdes.

“The bishop has reorganised how parishes are looked after so I am a member of the team who will be looking after the Dominican parish. I have also been appointed Chancellor of the Diocese - a part-time job in the diocesan office,” Canon O’Malley explained this week.

“I will be saying Mass every day, the only thing I have retired from is the administration of a parish.”

To mark Canon O’Malley’s departure from St Mary’s parish, a special celebration was organised by parishioners to convey their thanks and gratitude to him for all the work that he has done during his time there.

“The people of St Mary’s parish are blessed to have had him as their parish priest. He has been a great pastor during his time with us – indeed he ministered alone for periods, week in week out, rarely taking a day off,” explained Eddie Butler, chairman of St Mary’s Parish Pastoral Council.

Mr Butler was speaking at Ardscoil Mhuire in Corbally where parishioners gathered for a  function after a Mass of Thanksgiving was offered in St Mary’s church.

He was born in Limerick in 1941 and educated at the Model School and at Crescent College. In 1959 he entered St Patrick’s Seminary in Thurles to study for the priesthood, and was ordained on June 13, 1965.

The newly ordained Fr O’Malley left for London and spent the first 16 years of his priestly life ministering, in three different parishes, in the Archdiocese of Southwark.

“He has been a priest for 51 years and three months. It is reasonable to say that during all of this time he would have celebrated Mass on approximately25,000 occasions. Nonetheless, he has the same respect, dignity and reverence for the Mass as he had when ordained all those years ago,” said Mr Butler.

A highlight of his ministry in the parish was the project to refurbish and restore St Mary’s Church. This was a very significant task which cost more than €200,000 and took almost 18 months to complete.

Canon O’Malley paid tribute to his parishioners for their support during his time in St Mary’s parish.

“You get to know the community well and you get to appreciate every aspect of the life of the place. I want to thank all the parishioners and the people involved in the schools - all the different organisations and the religious of the parish as well who play a big part, particularly the Mercy Sisters,”  he explained.

Canon O’Malley is also well-known for his extensive postcard collection.

He has been collecting books since he was at school and in more recent years he began collecting postcards –picking out whatever caught his eye at auctions, car boot sales and postcard fairs. His collection has now taken pride of place in his new home in the city centre.

Canon O’Malley will be giving a talk under the auspices of Thomond Archaeological and Historical Society at Mary Immaculate college – focusing on county Limerick using the medium of postcards - on Monday, January 23 at 8pm.