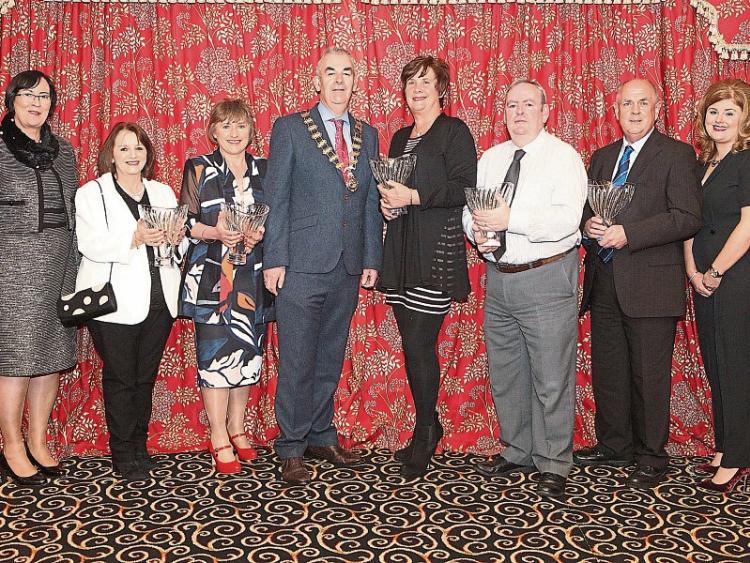 MEMBERS of Limerick City Branch of INTO turned out in force at the Greenhills Hotel to pay tribute to eight of their colleagues who have retired from teaching during the past 12 months.

The eight teachers have over 300 years of service to education in the Limerick area between them and will be known to thousands of former pupils throughout the city and county.

INTO vice president John Boyle, a Donegal native who is principal of one of the largest schools in Dublin, travelled to Limerick to show the union's appreciation of the contribution these teachers made to their schools and communities both inside and outside of the classroom over four decades.

The Irish National Teachers Organisation is a 32-county union with over 40,000 members countrywide and over 800 in Limerick city alone.

The teachers who were honoured included as follows: Colm Ward, who spent his entire teaching career in St Nessan's NS, Mungret and retired as principal recently; Kathryn O’Mahony who was principal of Milford NS in Castletroy, having taught there for 30 years. Kathryn taught in Dublin for four years before returning to teach in her native Limerick. In Milford NS, Kathryn was involved in all areas of school life including green schools, healthy eating, visual arts, sports and Christmas pageants. Kathryn served as principal since 2009.

Íde Synott taught generations of children in St Bridget's NS in Singland. Íde filled many roles over the years, including classroom teacher, resource teacher, reading recovery teacher and IT co-ordinator.

Michael O’Loughlin is a Clareman who taught in CBS, Sexton St for four decades, a lifetime of service to the school. At the time of his retirement, Michael was deputy principal.

Rena O’Shea a native of Cork, devoted herself to the education of children on the northside of Limerick city. Rena was principal of Thomond Primary School at Hassett's Cross at the time of her retirement having previously worked in Ballynanty, both as mainstream teacher and home school community liaison teacher. Rena also worked as principal in St Munchin's GNS before her final posting in Thomond Primary School.

Marie Maguire also taught on the northside of Limerick city where she worked in St Lelia's NS, Kileely since 2001. Prior to being appointed to her post in Kileely, Marie taught in Limerick School for Deaf Children. While working there, Marie developed a passion for special education which she retained throughout her career. Marie served on the Special Education Advisory Committee to the Department of Education for a number of years, where her expertise was greatly valued.

Bríd Quinlan, a native of Ahane, made a great contribution to the quality of education in Parteen NS. Apart from her role as a classroom teacher, Bríd's talents in music and drama saw her organise plays, musicals and Christmas pageants. Art was another of Bríd's talents and she enriched the lives of her pupils throughout her career.

Marie Donegan worked in the area of special education for almost her entire teaching career. In 34 years spent in Holy Family School in Charleville, Marie's expertise was invaluable. She saw the need to think outside the box and develop all the talents of the children in her care.

Marie coached Special Olympic swimmers from the school for World and European Games. On the academic side, Marie pursued post graduate qualifications in the area of autism.