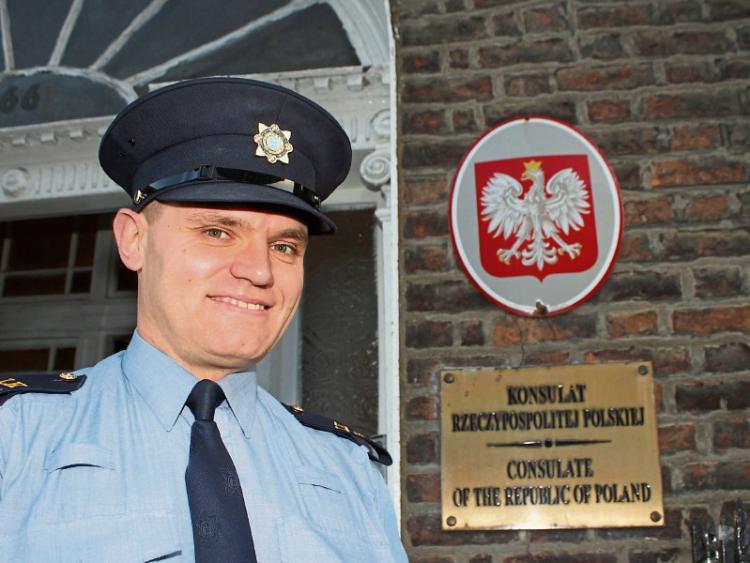 WHEN Dominik Przyborski moved from Poland to Ireland 12 years ago, little did he imagine he would be making history.

But that’s exactly what he’s done, after he became the first Polish-man on Limerick’s garda beat. He is attached to Henry Street garda station.

“It’s something I love doing. I enjoy working with people, helping people. It’s the kind of job where you do something different each day. Every day I have to use my problem solving skills. There is no shift quite the same,” Mr Przyborski told the Leader at a special event organised by the Honorary Polish Consulate in Limerick this Wednesday.

Mr Przyborski, 37, had long held an ambition to join the force from when he moved to these shores from his home near Gdansk after Poland joined the European Union in 2004.

Having worked in a hotel for the first five years in Ireland, he joined the garda reserves in 2009. The recession frustrated his efforts to join the force full-time, with a public sector recruitment embargo put in place.

Mr Przyborski was not to be outdone, however, and in 2014, he joined the Garda training college in Templemore, and ultimately worked his first day on the beat in August.

Patrick O’Sullivan, the honorary consul for Poland in Limerick, said: “I think it is very important, not just for Limerick citizens, but also for our Polish citizens who now have a member from their own country who they can relate to a bit better than our own gardai, who have done a fantastic job,” he said.

Supt Derek Smart, Henry Street garda station, added Mr Przyborski is a “great asset” to the force, and said he will be able to help the huge local Polish community.

But the new recruit added: “I am a member of An Garda Siochana. I am Polish – but I am not a ‘Polish garda’. I am here to serve everyone. If I can assist with the Polish language, or my experience of being a Polish person, I will do it. But I am here for all communities.”

Members of the Polish community came to the consulate event as did Cllr Jerry O’Dea, representing the local authority, and Mr Przyborski’s colleagues.