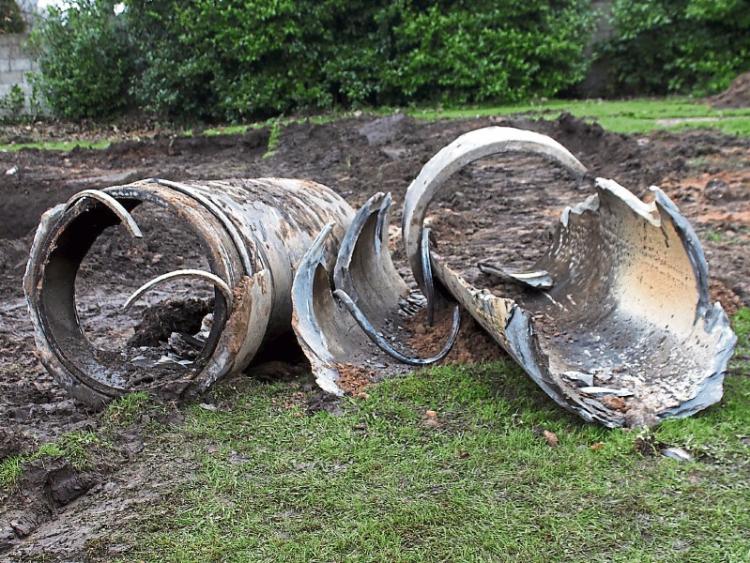 The damage done by the water outage over the weekend Picture: Adrian Butler

A FULL water service has now been restored in the Rhebogue area of Limerick city, Irish Water has confirmed.

The announcement comes after a burst water main saw over 200 homes without water over the weekend.

The pipe, which runs under a green space in Rhebogue Meadows, burst at around 2am on Saturday, with local residents describing the noise as being akin to an explosion.

Gardai and two units of Limerick Fire and Rescue Service attended the scene for over an hour before emergency crews were deployed, while a number of concrete garden walls were knocked such was the force of the water.

“Anyone who was affected by this should have their full service now restored,” a spokesperson for Irish Water told the Limerick Leader.

Meanwhile, Anti-Austerity Alliance councillor Cian Prendiville has rejected the recommendation by the water commission that some form of charging should remain.

The commission has recommended that while the vast majority should pay nothing, an allowance for excessive use of water should remain.

But Cllr Prendiville – a long-time and vocal critic of water charges – said the creation of a charging regime for a small number made no sense unless it was intended to charge people at a later date.

Speaking before the report was formally made public, he said: “The latest leaks from the Expert Water Commission report show that the government are trying to keep water charges alive by introducing a very limited charge initially. However, it is clear as day that by creating a charging regime which they say will only be for a small number of people they intend to eventually catch more people in that net," he said.

Cllr Prendiville believes people won’t be “conned” by this deal, adding: “They know that once the principle of paying for water is established that the charges will increase and the allowance will be reduced.  The Expert Commission seem to be providing Fianna Fáil with cover for signing up for water charges.”

He added his political alliance will back calls for anti-water charges street protests in the New Year if, as expected, the report contains these recommendations.