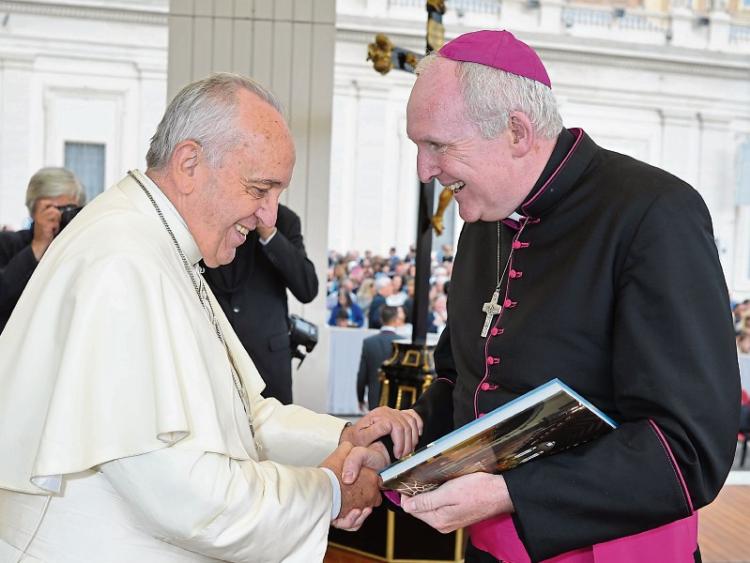 BISHOP of Limerick Brendan Leahy has said that “it would be magnificent” if Pope Francis were to come to Limerick and retrace Pope John Paul II’s footsteps.

Speaking following the announced that the Pontiff is to visit Ireland in August 2018, Bishop Leahy said that the visit of Pope Francis to Ireland in 2018 “is hugely significant in a national and church context”.

With regard to the potential for a repeat of Pope John Paul II’s visit to Limerick, Bishop Leahy said: “It is highly unlikely Pope Francis, who will be 25 years older in 2018 than Pope John Paul II was when he visited, will take on an itinerary as busy as in 1979.

“But we can never say never and will certainly be hoping he will come to Limerick. I do know that on the three occasions I met him since he became Pope, his eyes lit up when I mentioned Limerick so it is possible that he stayed here at some stage. He certainly has an affection for Limerick.

“So many people in Limerick remember Pope John Paul II’s visit here in 1979. Pope Francis’ visit to Ireland in 2018 will trigger much nostalgia around that but, moreover, will help bring us forward as a Church and, indeed, nation. For those of us who will be fortunate enough to have witnessed two popes visiting Ireland, we will be, indeed, privileged.”

“Europe has not been a place that has featured very high on his agenda in terms of nations visited. Yet he chose Ireland for the World Meeting of the Families and has now confirmed he will attend," said Bishop Leahy.

“There is something in this for sure. I believe he is being guided towards Ireland. He recognises what his visit can do for his people here and, particularly, those on the margins. He is also very much aware that people have suffered at the hands of representatives of the church and that there’s much healing still to do.

"He is very much a universal pastor and his presence here will certainly help with that healing.”

Welcoming the announcement of the Pope’s planned visit, Bishop Leahy said that it will bring to these shores one of the world’s most inspiring and admired leaders.

“Pope Francis’ visit is hugely exciting for the Church, of course, but will also be a hugely significant moment for the nation.  While we have a much changed Ireland since 1979 and we won’t be expecting the same type of numbers as then, there are few figures in the world, if any, that will attract the type of crowds that will want to see the Pope.

“Specifically for the Church, his visit is more than timely. We are now and will be in 2018 at a time of great change in the world and for our Church, following a very difficult period.

"We are very much in a process of regenerating the Church in Ireland so that it serves the needs of its faithful as they are today and will be tomorrow.

"Pope Francis’ visit here in 2018 will inject new energy into that process, which will be beneficial for the faithful but will also prompt those who are disillusioned with the Church to look at it again and see it as the Church of mercy and caring that Pope Francis wants it to be.”