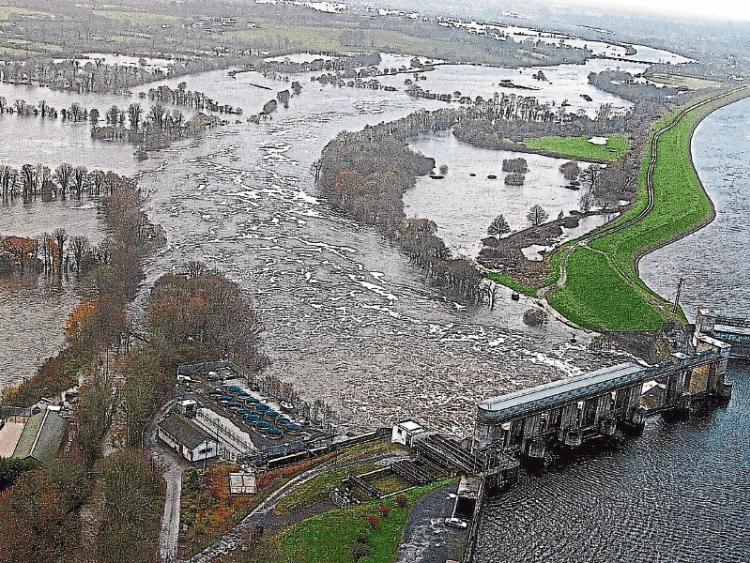 An aerial view of Parteen Weir during the flooding of 2009

CHRISTMAS was cancelled in many Limerick and Clare houses last year as the fear of flooding hung over them.

Some houses were badly damaged, other homeowners stopped the onslaught by manning pumps and filling sandbags night and day.

From the start of December into late January residents in the most affected areas of Castleconnell, Montpelier, O’Brien’s Bridge, Mountshannon Road in Lisnagry and Springfield, Clonlara received daily texts from the ESB about how many cumecs of water were flowing through Parteen Weir – and whether it had risen or fallen.

The power company, which is responsible for water levels along the Shannon, has been criticised in the past for “releasing excessive amounts of water” by county councillors and locals.

As December looms the Leader asked the ESB what plans are in place to combat flooding if December sees record rainfall like 2015.

“As it is very flat, it drains very slowly. For 200km from Lough Allen in Co Leitrim to Killaloe it only falls about 15 metres. This is the primary reason why flooding on the river can happen during periods of prolonged wet weather,” said a spokesperson.

ESB generates electricity at Ardnacrusha hydroelectric power station by diverting water away from the river to the power station via the headrace canal. In this way the flood risk in areas liable to flooding downstream of Parteen Weir, places including  Montpelier, Castleconnell, Springfield and Clonlara, is reduced, they say.

“Water is diverted at Parteen Weir through the headrace, power station and tailrace. The maintenance of this infrastructure is critical for the operation of Ardnacrusha.

“ESB inspects the headrace embankments on a regular basis and has carried out necessary maintenance to these structures throughout 2016.

“In addition, the turbine and generators and associated equipment at Ardnacrusha Power Station have undergone annual overhauls in 2016 to ensure, in so far as is reasonably possible, that they are fully available to pass the required water throughput.

“Spillway gates at Parteen Weir are maintained and tested regularly to ensure that they are fully operational, should this be necessary in the event of a flood,” said the spokesperson.

ESB issues twice weekly updates on Shannon lake levels to all relevant stakeholders together with a five day forecast of lake levels based on Met Eireann rainfall forecasts.

Following last winter’s flooding, the Government set up the Shannon Flood Risk State Agency Co-Ordination Working Group to ensure co-operation between the various groups that have an involvement on the river Shannon.

ESB is a member and has attended  group meetings.

“ESB is in discussion with the OPW and Waterways Ireland in relation to lake levels at Lough Allen with a view to seeing if it is possible to operate the lake at lower levels in the winter period.

“This may have some flood relief benefits for small to medium floods,” concluded the spokesperson.

With the recent dry weather the ground will also handle a deluge better than last year, if it comes.