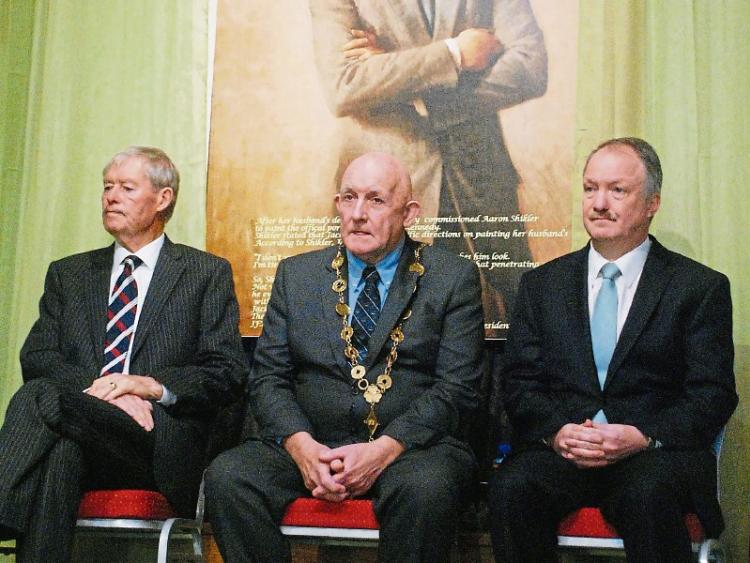 Organised by the Bruff Heritage he received the award from Mayor of Limerick City and County Cllr Kieran O’Hanlon for his outstanding contribution as a broadcaster and also in recognition of his support and work for charities in Ireland.

“He spoke about the contribution that the Kennedys made to the lives of many people. The reason of that of course is because the Fitzgerald family originated in Bruff. John F Kennedy’s great-grandfather left Bruff in the 1800s to go to Boston,” said PRO of Bruff Heritage Group Anthony Gubbins.

Mr O’Muircheartaigh and his wife Elena spent over four hours in Bruff meeting and conversing with the locals.

“There was a Mass first of all when he and his wife Elena arrived in Bruff. Then the presentation was made afterwards. About 70 locals came.

“They met him at the church beforehand and had photographs taken with him and they met him again afterwards at the presentation and spoke to him for quite a long time. He seemed to very much enjoy his time here,” recalled Mr Gubbins.

The local people in Bruff were delighted to get the chance to meet and speak with their visitors for such a long time.

The people who were there and met him said that it was a very enjoyable and expressed great enthusiasm towards meeting the visitors. The Heritage Group was very grateful that Michael and his wife Elena and Deputy Haughey travelled to Bruff to meet the local people as well,” said Mr Gubbins.

“Michael was very happy with the presentation and he got on very well with the people in the area who came to met him.”

When JFK’s great-grandfather Thomas Fitzgerald left Bruff, he took the family bible with him. It  was used by the family for generations to record deaths, marriages and births.

Established in 2015, The Fitzgerald Family Bible Bruff Award is given to a person who makes a significant contribution to the country of Ireland through a particular act or service. It promotes the link between Bruff and the Fitzgerald family Bible.