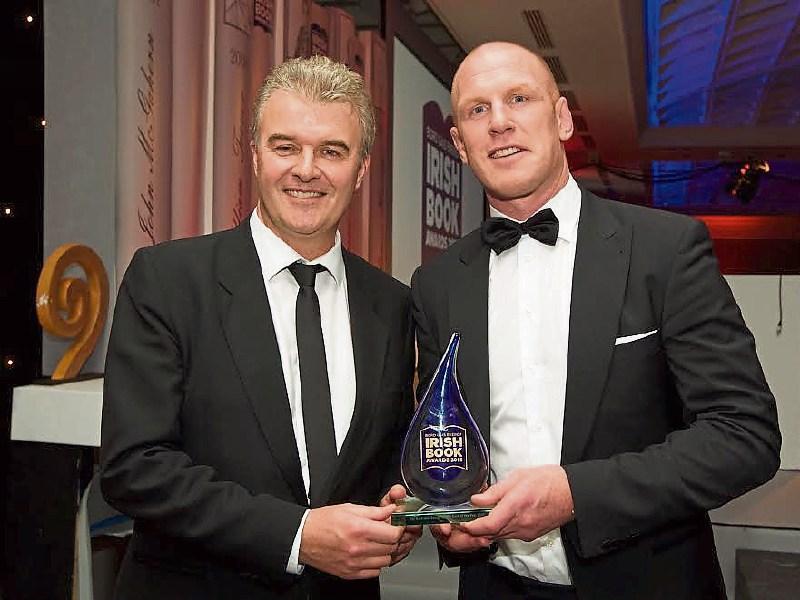 PAUL O’Connell’s autobiography, The Battle, is on target to become the “biggest selling Irish book of the year”, his publishers have said.

The former rugby star’s work – which was seven years in the making under co-author and former editor of the Limerick Leader, Alan English – scooped sports book of the year at the annual Bord Gais Energy book of the year awards in Dublin on Wednesday night last.

Speaking at the awards ceremony, O'Connell said in accepting his award: "As an rugby player, I feel very out of my depth intellectually here tonight. I never thought I'd share an awards stage with Jilly Cooper or John Montague for that matter.

"I wasn't clever enough to write this book on my own. I was lucky when I agreed to do the book back in 2009 that Alan English came on board to help me as a ghostwriter. We've been at it seven years. I was delighted with the book.

"I think to write a book about yourself is a difficult thing to do. For me anyway I felt very awkward. I still feel awkward when I walk past it in a shop, and see it for sale. I was really happy with what we produced, and a big part of that was down to the work, commitment, passion and ambition that Alan English had for the book, so I really want to thank him for that.

"For all that's happened in my rugby career, to walk past a small book shop and see a few of my books in the window is a great thing."

Speaking to the Limerick Leader following the announcement, Michael McLoughlin, managing director of Penguin Ireland, said the publisher is “thrilled” with the success of his book.

“It’s been number one in the bestseller list since it was published in October and it looks like it’s going to be the biggest selling Irish book of the year. Paul will be signing copies in Eason Limerick soon so people should keep an eye out for that,” said Mr McLoughlin.

The former Munster, Ireland and Lions captain beat off competition from Jason McAteer and Donal Lenihan to win the top award, among others. #

The latter was also spotted tackling O’Connell in a warm embrace.

Surely the picture of the night from the Irish Book Awards! Jilly Cooper with leading man @Paul_OConnell. Story herehttps://t.co/WLUa6VxEJV pic.twitter.com/Zz0ciXTN0F

Paul will be signing further copies of The Battle in Eason’s in Limerick on December 3, from 2pm. People are urged to arrive early to avoid disappointment, given the huge demand to meet him.