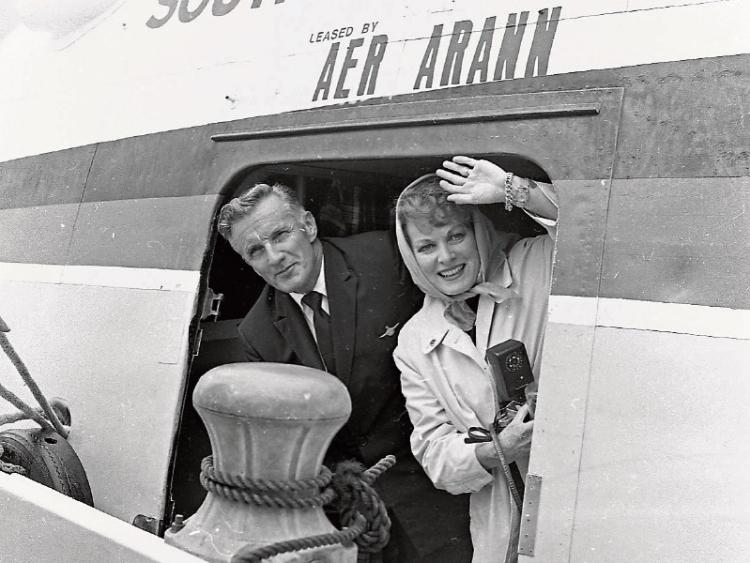 Maureen O'Hara arriving at Foynes with her husband, Captain Charles F. Blair in 1976

MANY pieces from Hollywood icon Maureen O’Hara’s wardrobe and personal collection have been donated to the Foynes Flying Boat Museum, and now much of her remaining memorabilia is set to be auctioned off in New York.

While more than 50 of her dresses, all of her awards and a huge number of her other belongings now reside in the museum, some of her other items are expected to fetch thousands of dollars each.

The Dublin-born actress had a strong affinity for Foynes, with her husband Captain Charles Blair having been the aviation pioneer who made the first non-stop commercial flight from Europe to New York. The pilot also flew the last scheduled flying boat out of Foynes by his airline, AEA, in October 1945.

The memorabilia available for sale in New York includes ‘secret love letters’ sent to Maureen by John Ford, the director of The Quiet Man, in the months before filming began in Ireland.

According to Bonhams auctioneers, the letters were “so intimate and intense that O’Hara herself planned to destroy them upon her death, but in later years changed her mind”. They are expected to make hundreds of thousands of dollars.

John Ford’s personal script for The Quiet Man, with notes by Maureen, is estimated to fetch up to $100,000.

A mug that was given to Maureen by her co-star John Wayne, a tweed jacket that she wore during the film, and the jaunting cart used to carry cast and crew members are among the items for sale related to the famous film.

A batch of so-called “political correspondence”, including Christmas cards from Bill and Hillary Clinton and the Reagans, are also up for sale for over a thousand dollars.

But Limerick fans needn’t worry about forking out thousands for a slice of Maureen O’Hara’s glamorous history, as Foynes is proudly positioning itself as the destination of choice to view her extensive collection.