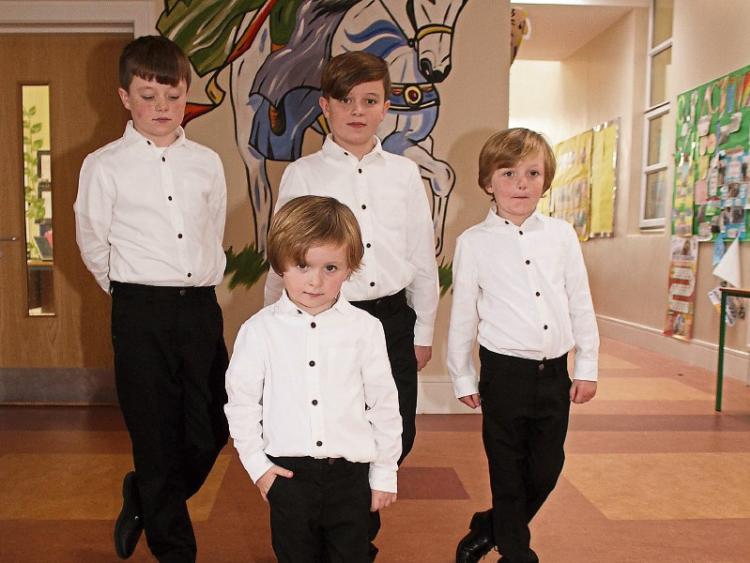 OUT OF thousands of acts the Murphy Ryans from Moymore have been chosen to perform on this year’s Late Late Toy Show.

Jakob, aged 4; Noah, 6; Aaron, 10 and Zach, 11, will display their sean nós dancing skills to an estimated 1.3 million viewers on the most watched television programme of the year.

It will be even more special for Jakob as he will turn five when the clock strikes midnight on Friday, December 2.

“There is no such thing as walking – it’s all dancing and tipping and tapping,” said Margaret, who is married to Aidan.

Their two oldest children – Alex and Rebecca -  will also be cheering the boys on in a night the family will never forget.

“The lads came home from school and asked me could they go to The Teach in Cloverfield to do sean nós with Pat. They're involved in soccer, GAA, everything and they haven't time but they went on and on so we went up to Pat on a Friday night just to see. They loved it and have been going ever since,” said Margaret.

Jakob only started dancing last Easter and his brothers just last year. Margaret and Aidan both danced in their youth so their sons didn’t lick it off the ground.

“They have taps on their shoes like tap dancing but with a big difference at the same time. It’s very free dancing, your hands can be moving - it’s not like Irish dancing where you are like a poker,” said Margaret.

The next step to meeting Ryan Tubridy was when local man Robert O’Donnell held a fundraiser to do charity work in Haiti. Alex told him he had four brothers who dance and they duly brought the house down.

“So many people saw it and said to me why don't you put them in for the Late Late Show,” she said. It was her daughter Rebecca who shot the clip and sent it in.

"It was gone in a week before they decided to let me know,” laughed Margaret. Next thing she knew they were in Dublin for an audition in RTE.

“I said to them, 'Lads what ever happens after this is a bonus but be proud that you got this far - don't be worried do your best'.

“When Zach came out his eyes told the story - they were beaming. He said, 'Mom, I never saw Jakob dance like he did today, he was amazing!'” recalled Margaret, who got the call last week that her sons were through.

“They were thrilled,” said Margaret, who thanked their teacher Pat O’Dea.

"He has been absolutely fantastic and so supportive. He is over the moon as well," said Margaret.

”It’s fantastic news. We started doing figure dancing with the Nolan School of Dancing and then Pat O’Dea with sean nós. The boys love it as much as the girls. It is all part of our Active Flag and health promotion in the school. All the children are very talented,” said Ms Franklin. Amazingly a number of the girls in the 138 pupil school also got through the first Toy Show audition.