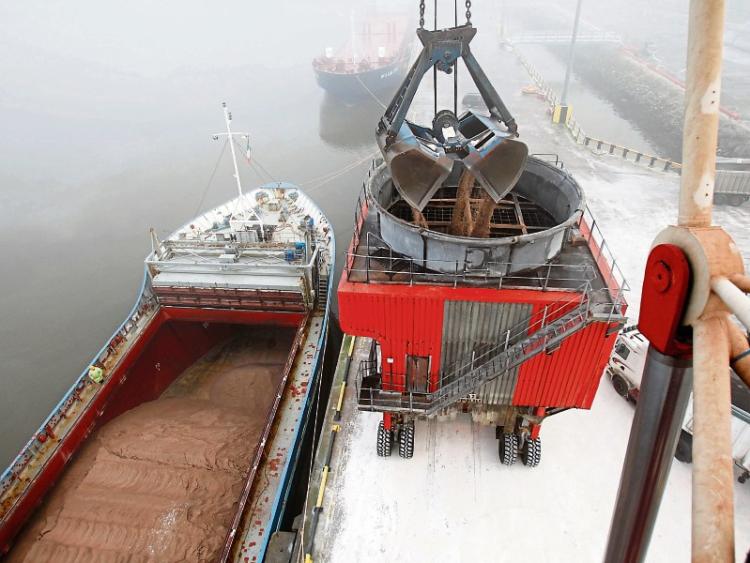 A ship arriving into Foynes with much needed salt in 2011

TEMPERATURES hit a balmy 16 degrees on Monday but a cold spell has snapped later this week and Limerick City and County Council says it is well prepared.

It currently has 2,704 tonnes of salt to shake on roads in storage in warehouses and depots. The council has 1,024 tonnes more than last year. There is also ready access to additional salt if it is required during the season, said a spokesperson.

“Limerick City and County Council has sufficient salt stocks in place and available to treat national, regional and local roads this winter. There are 14 trucks with gritters employed to treat the roads when required.

“Current practice is to endeavour, within the limited resources available, to maintain major traffic routes in a passable condition,” said a spokesperson.

Few will forget late November and December of 2010 which brought prolonged periods of cold weather down to minus 15. It led to significant disruptions to traffic and travel; burst water pipes caused untold damage as well as resulting in water shortages in many parts.

Shipments of salts arrived into Foynes Port in January 2011 to replenish nationwide salt stocks. Winters have been largely mild since then but the council is covered for every eventuality.

“It is the policy of Limerick City and County Council to provide a winter service plan, which, as far as reasonably possible, allows the safe movement of vehicular traffic on the more important defined routes of the road network, while minimising delays and accidents directly attributed to adverse weather conditions in accordance with the priorities set out below as resources permit.

“We will be in constant liaison with Transport Infrastructure Ireland about supplies for treating roads,” said the spokesperson.

The main objectives are to provide practical advice on how best to prepare for the coming winter; to ensure the public are aware of where advice and help can be found, if needed, and to reassure the public that preparations are being made and arrangements have been put in place to ensure a coordinated response to severe weather events.

The key message is, “to be prepared, stay safe and know where to find help if you need it”.

For full information log onto www.winterready.ie and the Office of Emergency Planning will be regularly tweeting during winter from @emergencyIE.

Meanwhile, the Government has launched its Be Winter-Ready 2016-2017 information campaign.