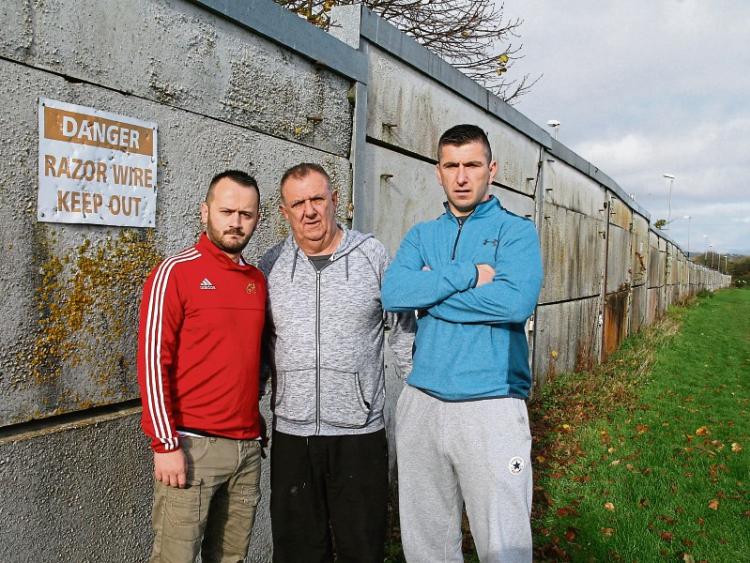 Dean Quinn, who started the petition to demolish the Moyross wall, along with Tommy and Jamie Daly

AS DONALD Trump plans to build a wall along the Mexican border, Limerick residents want to demolish a huge wall which they say bars their estate from the city.

A Mexican stand-off is developing as residents in Moyross want a ten-foot wall demolished to give them access to neighbouring areas.

At present, the housing estate is cut off by the wall which residents want knocked to provide open access to Thomond Village, the Old Cratloe Road, Caherdavin and the rest of the city’s northside.

More than 100 people have signed a petition calling for Limerick City and County Council to demolish the divide – known locally as “the Berlin Wall”.

But residents on the other side fear an increase in anti-social behaviour if the partition is removed. The online campaign states it is a “disgrace” the wall was put up in the first place.

“While American president-elect Donald Trump wants to build walls to heighten division and tension, we want to knock ours down and foster inclusivity,” it states.

"We want Moyross opened up to the rest of the city. Not ghettoised and separated.”

Speaking of the quarter-mile long wall, local activist Dean Quinn, who started the petition, said: “It is degrading and an insult to our community”, while the chairman of the Moyross Residents Alliance Tommy Daly added: “It is like being in an internment camp”.

“We feel excluded from the other communities surrounding us. It is just horrible. The people of Moyross are being treated like dirt and it is not nice. If you had a big wall around your community, how would you feel,” Dean asked.

Mr Daly added: “If Mr Trump wants to put this wall up on the border with Mexico, he can take ours out of Moyross. You cannot divide communities. Why would you? Is there something wrong with our community? The wall does nothing but bring torment and despair to people.”

He also highlighted a number of safety issues with the wall, including holes in the structure being filled by wooden blocks, pointing out despite warning signs, youngsters still use these to scale it.

However, one Caherdavin resident – a community activist who asked to remain anonymous – predicted an equally strong campaign in their area to keep the wall standing.

“I don’t know what the problem is, as there is a small cutting where people can go through. People fought for years to have the wall put up. There is an open field just before the wall, and what was happening there was a lot of anti-social behaviour, and the wall stopped it. Horses and all were coming across to Caherdavin before it was erected,” they said.

Another Caherdavin resident who contacted the Leader, said that the wall was built around the student village and is thus on private property, while there are railings and a walkway separating the two areas in an area away from the wall in question.

The online petition has however attracted signatures from as far afield as Turkey and Mr Trump’s homeland, the United States of America.

Patrick Geoghegan, who grew in in Moyross, but is now living stateside, wrote “there was always a sense of separation from certain neighbourhoods” when growing up on the northside estate, plus “a feeling of less class and discrimination”.

“Removing that wall removes that feeling of separation and may give kids growing up in the area now more of a feeling there is more to life than one area,” he added.

A council spokesperson says they will examine the “specific issues” raised by the petition: “It is important to point out that a pedestrian link between the two estates is already in place,” they added.