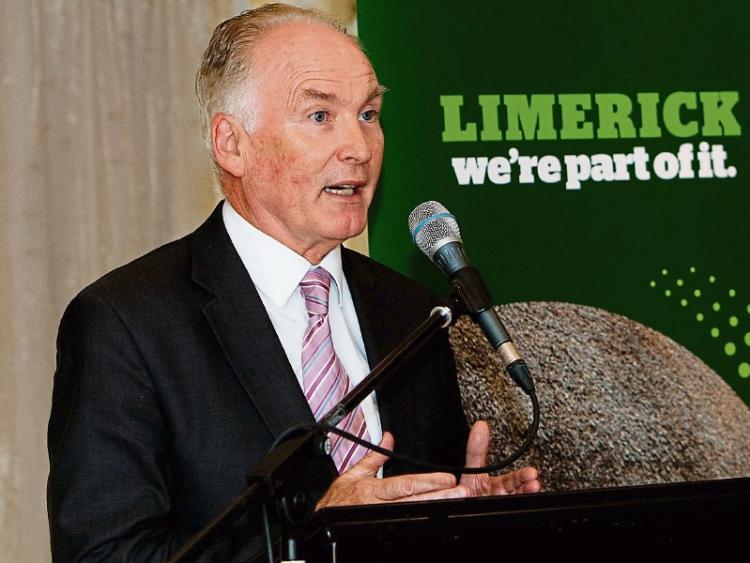 Tim O’Connor is the latest person of the month

LIMERICK native Tim O’Connor who is involved in a number of initiatives which have raised the profile of Limerick on both a national and international level has been awarded the Limerick Person of the Month award.

Over the past four years the Killeedy native has served in many leadership roles for his native Limerick.

“I love the ambition and energy and drive that is going on right now in Limerick,” said Tim, who added that he is “honoured and thrilled” to be presented with the Limerick Person of the Month award.

“It is a very great honour always to be honoured by your own people  - it’s fantastic altogether.”

Having spent 43 years away from Limerick Tim became heavily involved in a number of projects in recent years.

Tim is also vice chairman of Global Limerick Network (GLN) a new initiative whereby Limerick City and County, as the homeplace, engages with its diaspora all over the world.

In the past Tim served as chairman of Limerick Marketing company. He is also a member of Limerick Economic Forum chaired by Denis Brosnan.

“You have a situation in Limerick whereby you have the private sector working very closely with the council and that’s a great model,” he said.

He is also chairman of the Shannon Consortium which is a collaboration - or what’s called a regional cluster - of the higher education institutions in the region - the University of Limerick, Limerick Institute of Technology and Mary Immaculate College.

What has prompted him to get involved in so many groups?

“I am very proud to be from Limerick. In Dublin I say, ‘If you are looking for a place where interesting things are happening, then go to Limerick'.”

Growing up, Tim was a border in St Munchin’s College.

After a two-year stint as a teacher, he joined the Civil Service in Dublin in 1974, moving to the Department of Foreign Affairs (DFA) in 1979.

Most of his DFA career was spent working on the Northern Ireland Peace Process.  He was part of the Irish Government Negotiating Team for the Good Friday Agreement, was involved in the negotiations leading to the establishment of the new north/south structures arising from the Agreement and spent almost six years in Armagh as the inaugural joint secretary of the North/South Ministerial Council.

His foreign postings included the Embassies of Ireland in Bonn and Washington DC and from 2005-2007 he served as the Consul General of Ireland in New York, USA. He served as secretary general to President Mary McAleese at Aras an Uachtarain from 2007 to 2010.

Tim resides in Dublin but gets back to Limerick a couple of times every month.

Tim’s partner is Yvonne Shields, the chief executive of Irish Lights - the Lighthouse Authority of Ireland.

Tim has three children - Ciara, Barry and Aoife, and he has three grandchildren Luca, Sean and Orla. who reside in France.