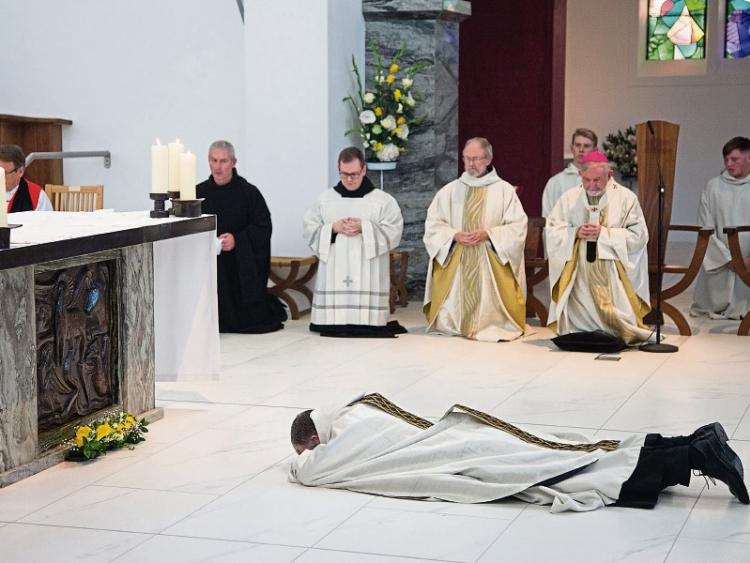 The new Abbot of Glenstal, Fr Brendan Coffey lies prostrate during the litany

THE SIXTH Abbot of Glenstal, Fr Brendan Coffey received the abbatial blessing in the abbey’s newly renovated church on Saturday.

The Ennis man was elected the new abbot twelve weeks ago but the community waited until after the completion of the current phase of works before celebrating the solemn rite of blessing of an abbot.

It was conferred by Archbishop of Cashel and Emly, Dr Kieran O’Reilly.

The Glenstal community was joined in choir by 25 abbots, abbesses, monks and nuns from Benedictine, Cistercian and Poor Clare monasteries from Ireland and abroad.

Five other bishops concelebrated the Mass with the archbishop and Abbot Brendan. 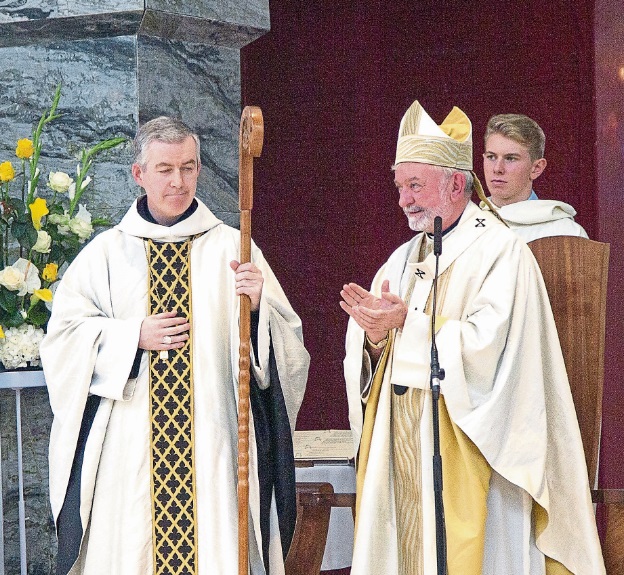 They included the retired Archbishop of Cashel and Emly, Dr Dermot Clifford and the retired Bishop of Killaloe, Dr Willie Walsh, who ordained Abbot Brendan a priest in 1995. The Church of Ireland Bishop of Limerick and Killaloe, Dr Kenneth Kearon, was also present in choir.

The rite of blessing took place after the Gospel. Abbot Brendan was escorted to the archbishop by his two immediate predecessors, Frs Christopher Dillon OSB and Mark Patrick Hederman OSB. Prior of the monastery, Fr Senan Furlong OSB, then formally presented the abbot to the archbishop and asked him to confer the blessing.

The moving ceremony included Abbot Brendan being presented with various symbols related to his office.

He first received a copy of the Rule of St Benedict, then a silver ring, to be worn as a sign of fidelity, with the instruction to “wear it as the symbol of constancy and maintain this monastic family in the bond of brotherly love”.

Finally, Archbishop O’Reilly presented the abbot with a wooden crozier, a shepherd’s staff, admonishing him to “show loving care for the brothers whom the Lord has entrusted to you; for he will demand an account of your stewardship”.

After this Abbot Brendan, who will serve for eight years, took his place beside the archbishop and was greeted with applause.

Abbot Brendan then received the sign of peace from the archbishop and his assistants, before moving into the centre of the choir, to share the same fraternal greeting with all of the monastic men and women present.

Just before the end of Mass, Abbot Brendan turned and addressed the congregation.

Asking for their prayers that he might be a good abbot, he cited St Bernard’s advice to new abbots – “Notice everything. Turn a blind eye to some things. Correct a little. Cherish the brethren.”

The liturgy concluded with the chanting of the Church’s great hymn of praise, the Te Deum, while church bells rang out.