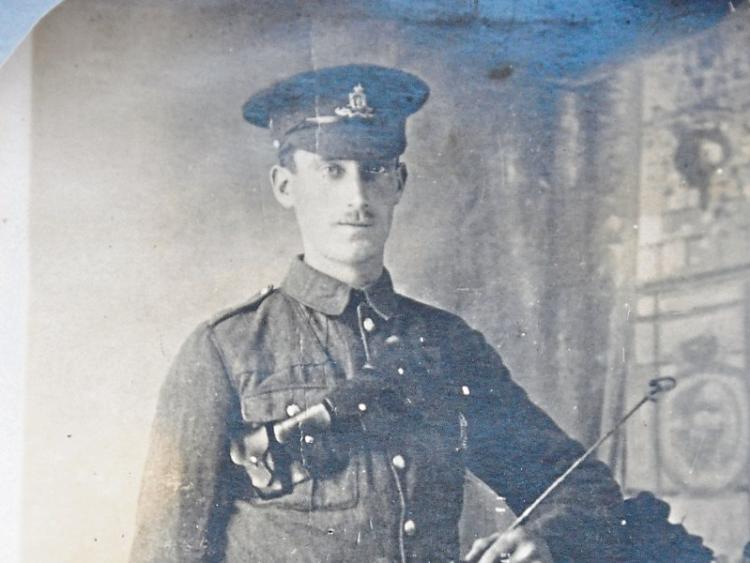 John O'Brien, Lisnagry, who died during the battle of the Somme in 1916

A LIMERICK man who died during the Battle of the Somme in 1916 has been remembered by family at the centenary of his death in France.

John O’Brien, from Cappanahanagh, near Lisnagry, died during the famous World War I battle when he was just 25 years old, and is buried in the St Sever Military Cemetery in Rouen, Normandy.

“It was very moving walking around the cemetery, because every stone tells a story,” said his grand-nephew Terry Nicholls, who lives in the UK.

John was fighting for the United Kingdom as part of the allied forces of Britain and France, with both armies opposing Germany at the Battle of the Somme.

A member of the Royal Garrison Artillery, he died during battle on October 14, 1916.

Terry travelled to Normandy for a centenary remembrance visit, to see the grave of his grandmother’s brother.

“The trip was just on my own initiative — I didn’t know for a long time where he was. It just struck me that the anniversary was coming up of Uncle John, so I got online and as soon as I found out that he was in Rouen, from here in England, it was an easy ferry ride across, and I thought it would make an interesting tribute,” he said.

“There were a remarkable number of Irish headstones there. One that stuck in my mind was that of a 19-year-old lad who was a horseshoe assistant.”

John was the oldest of a large family of O’Briens who grew up near Lisnagry. Their father was chauffeur to Lord Barrington.

Although related to John O’Brien on his mother’s side, Terry’s father also comes from a military background.

His parents met when his mother moved to the UK to nurse during the Second World War and his father was a military patient in hospital. His paternal grandfather was also posted in Phoenix Park, Dublin during the Easter Rising.

More than one million were killed or wounded during the Battle of the Somme, which took place between July and November, 1916. The battle is considered one of the bloodiest in history.