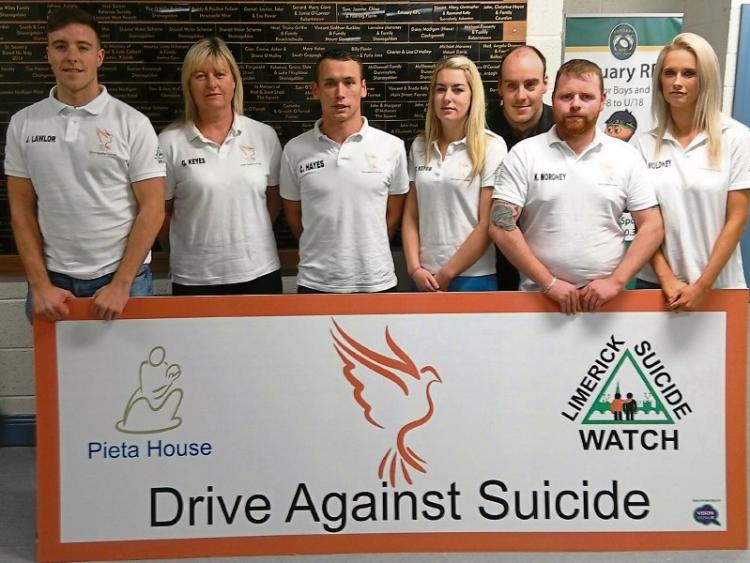 Drive against Suicide organisers ahead of the event

A SMALL number of places are still available for the Drive Against Suicide which takes place this Sunday.

Over 100 cars have already registered, the chairman of the organising committee, Cormac Hayes was happy to reveal at the weekend.

But he was optimistic that all 150 slots in the event would be filled before the cars take off shortly after 11am on their odyssey around West Limerick and North Kerry.

And Cormac has suggested that people take their full quota of passengers so as to ensure that everybody who wants to take part in this very special event will get the chance to do so.

Both he and his fellow organisers have been buoyed up by the huge response so far.

“We have thousands of euro collected already, a lot of it from donations,” Cormac said, adding that the registration fee for a car is just €20.

“We are releasing 15 doves on Sunday morning,” Cormac revealed.

Pieta House, Limerick Suicide Watch, Mental Health Awareness and members of Drive against Suicide will release the doves at Mungret GAA club carpark before the drive gets underway.

“We will also be releasing 150 balloons,” Cormac said, adding that people who want to take part can buy a balloon and attach the name of a loved one for €1.

The organisers have a mighty odyssey planned led by up to 20 motor-bike traffic marshalls. The motorcade will  begin in Mungret before travelling through West Limerick and North Kerry.

On Sunday evening in Adare, a big night of entertainment with food and raffles is planned in Bill Chawkes bar.

Register at Mungret from 9.30am on Sunday or contact Cormac on 085-1534231 or go to the Drive against Suicide Facebook  page. “This is everyone’s event. Mental health has affected so many families and has left so many questions,” Cormac said.