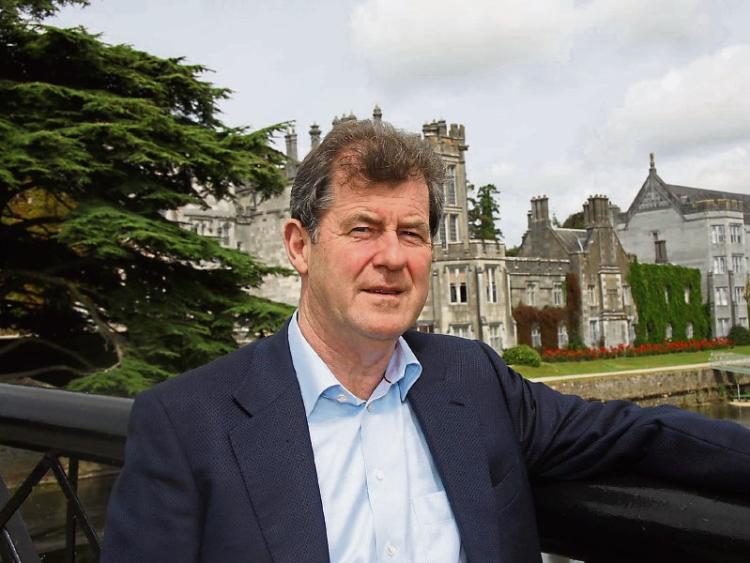 Limerick businessman pictured at Adare Manor, which he owns and is currently redeveloping

BILLIONAIRE Limerick businessman and racing magnate JP McManus has now given over €225m to charities over the past two decades, it has been confirmed following the filing of the most recent accounts for one of his companies.

Recent accounts filed for the JP McManus Charitable Foundation show that the board gave over €1.2m to charities last year, and in the past 15 years, since it was established in 2001, it has now paid out a total of €60,731,301.

In addition to this, a further €40m has been pledged through the JP McManus Benevolent Fund for the Mid-West region, at least €100m has been raised through successive JP McManus Pro-Am golf tournaments, and some €35m has been spent on two scholarships funds.

The CBS Scholarships fund, in recognition of the school he attended in Limerick, received €2m from McManus, and the €32m All-Ireland Scholarships fund saw €1m pledged for each of the 32 counties north and south of the border.

Some 250 charities applied to the Charitable Foundation for funding in 2015, of which approximately 150 were successful, ranging from hospitals across the country, to drug addiction schemes, missionaries abroad, cancer societies, and regeneration projects in Limerick.

The board entrusted by Mr McManus gave a total of €1,260,270 to charities in 2015, and it currently has a total fund of €46.4m at its disposal, raised through investment opportunities.

The principal activities of the foundation through its donations is to provide relief from poverty; provide care and comfort to those who are terminally ill; alleviate distress in the areas of drug addiction, human rights and sexual and physical abuse and to support the provision of education and training.

Mr McManus doesn’t sit on the board of the foundation, but his wife Noreen and his daughter, Sue-Ann Foley are directors, along with Mark Power, Gerry Boland, and Declan Moylan.

Mr Boland, who sits on three of the committees, confirmed to the Limerick Leader that that the three bodies are separate entities but co-operate with each other.

He added that the total figure donated to charities, deserving students, and major projects across the country in the past 20 years is at least €225m, and possibly greater.

Recently some €1m has been donated from Pro-Am funds to the Mid-Western Hospital's Development Trust, as well as €5.5m to the dialysis unit in University Hospital Limerick, which is set to open on November 14 next.

In addition to the Charitable Foundation, a separate entity, the JP McManus Benevolent Fund supports local community initiatives and non-profit organisations throughout the Mid-West, and funds of €40m have been committed to local projects.

This fund is managed as a sole entity, independent of any existing programmes sponsored by Mr McManus.

It covers the areas of education, healthcare, community and local infrastructure.

The funds provided by the Foundation and the Benevolent Fund are separate to the millions that have been raised by the JP McManus Pro-Am, which have surpassed some €100 million raised for worthy causes since 1987.

The two-day tournament in Adare previously attracted the best golfers in the world to Limerick, including Tiger Woods, and celebrities including Hollywood stars Michael Douglas, Samuel L Jackson and Hugh Grant.

The Pro-Am is due to make a comeback to Adare in July 2018, following the €50m refurbishment and renovation of the five-star Adare Manor Hotel & Golf Resort, which was bought by McManus for an estimated €30m.

Plans for the revamp of Adare Manor – which is set to transform it into the ‘Augusta of Europe’ – include the construction of a cinema, a new bedroom wing over five levels, a new pool, as well as a “first class spa”; the restaurant and bar area will also be extended and a new ballroom will be built.

Overall the development will result in 7,664sqm of new hotel floor area.