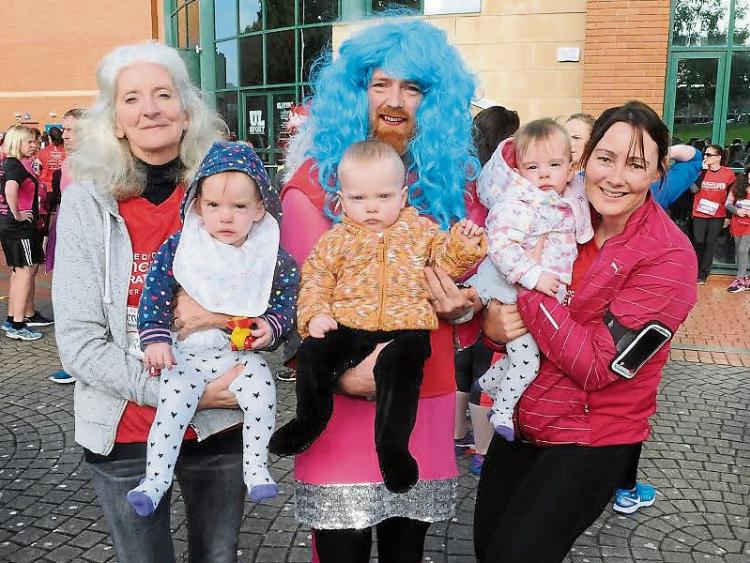 The 18th annual run honoured the late Gemma Carcaterra, a local runner and mother of young triplets, who died suddenly in February this year.

Participants of all ages and backgrounds were more than eager to take off from the finish line at UL, in the 5km and 10km races.

An elated Grace told the Limerick Chronicle that she was “delighted” with the win, and to be sharing the podium with talented athletes, Orla and Carol. She said that her long-term goal is Tokyo 2020.

And while there was a competitive element to the afternoon race, hundreds took part for fun and fitness, while contributing to various local charities.

Running in memory of Gemma, loving husband Colm Clarke said it was “great to see support from family and friends” on Sunday morning.

He took part in the 10km race, dressed in a bright blue wig and wearing a resplendent pink dress, with strong support from Rosa Carcaterra, Eimear Clarke, and his young triplets, Ava, Coen and Riona.

“She was involved with Daghda [Dance Company] here in Limerick. She took part in this event many times and in the Great Limerick Run many times. She made this area her home,” he said.

Organiser John Cleary said that the warm, sunny weather contributed to the success of the afternoon. He added that the “superb team worked really, really hard”.

Deputy Jan O’Sullivan was also in good spirits ahead of her 10km walk.

“This is always a fantastic occasion, and the great thing about it is that everyone enjoys it, and they also raise money for really, really good causes, and there are loads of people for things like breast cancer, Feileacain, the stillbirth association, and we are doing it for Rape Crisis Mid-West. There are whole lot of good causes.”

Pick up the Limerick Leader weekend broadsheet edition for more coverageof the Mini-Marathon.