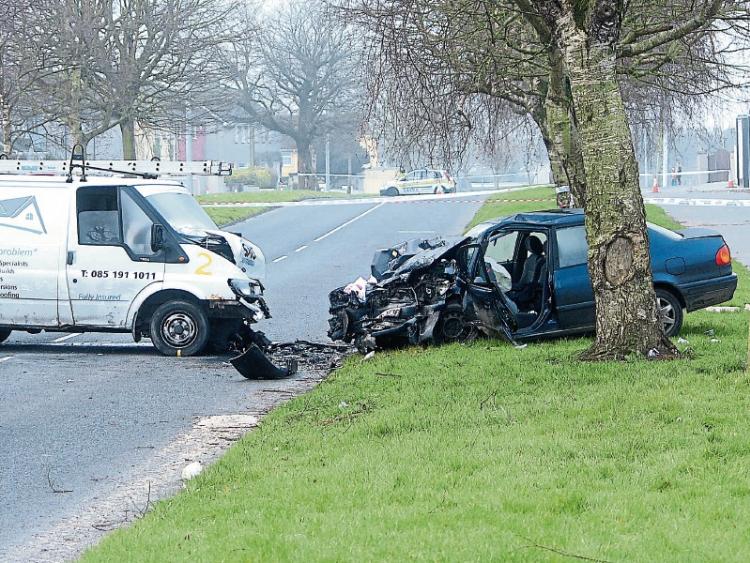 The scene of the fatal collison at Hyde Road

THE driver of a van involved in an crash in Limerick city last March in which two young men died has described the scene that confronted him afterwards as “horrific”.

The occupants of the other vehicle involved in the crash - Andrew Mason-Roche, 23, of Ballyclough Avenue in Limerick city and Michael Madigan, 28, of Liosdara, Broadford, Co Limerick - both died as a result of injuries sustained in the collision which occurred on the evening of March 15 last.

In a statement read out at an inquest into their deaths this week, the driver of the van described how he had been travelling down Hyde Road with his daughter when a navy-blue Toyota Corolla crashed head-on into his van.

He and his daughter were hospitalised overnight following the accident, but both were released the following day.

However, a puppy belonging to the little girl was killed.

“I can’t describe how horrific the scene was during which I was also distraught that my daughter would die,” the van driver said.

Evidence was heard from Garda James O’Brien, a forensic collision investigator, who attended the scene following the crash. He reported that the Corolla had turned into Hyde Road from Lower Careys Road and was travelling south when it appeared to cross over the road and collide head-on with the Transit van which was travelling in the opposite direction, towards Limerick city.

Conditions at the time were good, and the street was well-illuminated, he said.

Garda O’Brien reported that when he arrived at the scene, he found that the fronts of both vehicles were badly damaged. The Corolla was on the grass margin, facing onto the road, while the van was diagonally straddling the centre of the road. There were no tyre marks on the surface of the road and both vehicles appeared to have been in good condition prior to the crash.

According to Garda O’Brien, the positioning of the vehicles indicated that the driver of the van appeared to have tried to take evasive action to avoid a collision but had been unable to do so.

The van had been stopped and pushed back slightly by the impact. “This would indicated a far greater speed on the part of the car,” he said.

The driver of the van gave evidence that he had left his house on the Old Cork Road with his daughter some time earlier. They were due to call to a house in Ballinacurra Weston and had planned to go for chips afterwards.

As they were driving down Hyde Road, he saw a car approaching from the opposite direction.

There was a loud screeching noise and the car crossed the centre line of the road and “hurtled” towards them. “I was hard to believe the speed at which the other car drove at me,” he said.

Afterwards, he had to force open the door of the van to get his daughter out as the impact of the crash had caused it to be jammed.

“I ran across the road with my child in my arms before meeting two girls that took my daughter before I collapsed to the ground in pain,” he said.

His daughter then asked for her puppy which had been in the van with them and when he returned to the van he found the dog dead inside.

He also recalled seeing ambulance crews trying to resuscitate the driver and passenger of the car.

“It was a sickening sight. The two bodies were motionless and I thought they were dead,” he said.

”I remember ambulance staff trying to resuscitate the passenger and someone shouting that the driver was still alive and was moving,” he added.

A toxicology report found that Mr Mason-Roche, who was the driver of the car, had no alcohol or drugs in his system.

The inquest concluded that both men both died as a result of multiple organ failure due to the injuries they sustained in the crash.