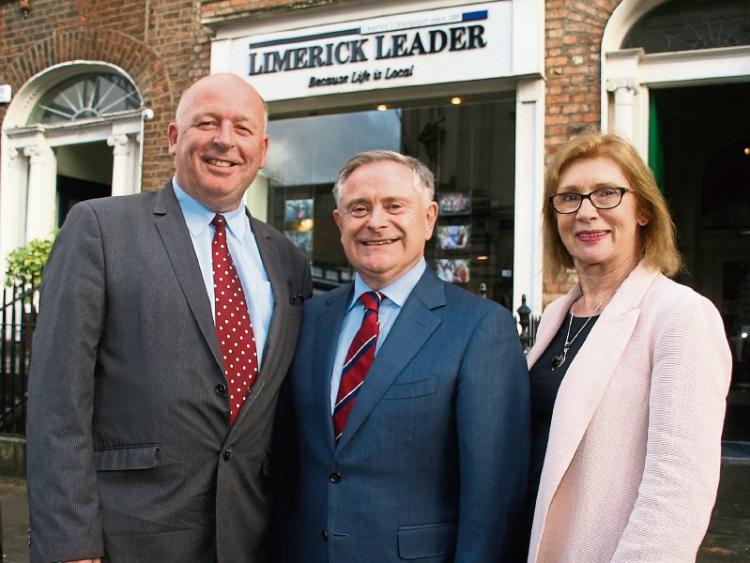 Mr Howlin – who until February was at Limerick Finance Minister Michael Noonan’s right hand leading the Department of Public Expenditure and Reform – was in the city recently.

While he paid a visit to the Limerick Leader, his main intention was to assess Labour’s state locally – with Limerick one of the few constituencies to return a TD for the party in the shape of Jan O’Sullivan.

“I set an ambition in May to double the party’s membership. We have started that progress. I have also set the ambition of doubling our number of councillors [Labour has 50 at present]. We have to prepare for the next election in 2019, and identify candidates. We have to connect with people who think like us but who do not engage in party politics, and invite them into the Labour family,” he said.

Ms O’Sullivan said: “In our last campaign – the general election – we have had really good teams, we have had people who maybe had drifted from us, a couple who were annoyed with us, but decided they wanted to keep a Labour seat in Limerick. These are the kind of people we want to ensure we keep in our organisation. One target I have is to build our organisation in county Limerick. We are healthy in the city, but quite thin on the ground in the county.”

Since Labour left office following a heavy election defeat in February, Limerick has enjoyed a renaissance in terms of multi-nationals investing in the city, with 750 IDA-backed jobs being created in the last month alone.

Mr Howlin believes it was his government who helped put the right conditions in place for foreign direct investment companies to come here.

He said: “Nobody believed back in 2011, a minority Fine Gael government would have survived six months. The likelihood is we would have been in a series of elections with catastrophic results for our economy. We would have had the flight of capital, there would have been no positive views of Ireland. What we needed to do over the last five years was give people confidence in this country to invest.”

Unlike in 2011, when Labour coalesced with Fine Gael, the political landscape is a lot more choppy now, with the previous senior partner now in a minority coalition with the Independents.

Many commentators have speculated at dates for the next general election, with the consensus this government will not go full-term.

If the government went to the country in the short term, former Education Minister O’Sullivan confirmed she would “absolutely” go again.

And Mr Howlin bullishly predicted that she would hold onto her seat, despite the likelihood of Fianna Fail running two candidates after Willie O’Dea was elected with a huge surplus back in February.

“We would certainly hold our seat in Limerick, I’m confident of that. We have a superb representative in Jan O’Sullivan who was an outstanding member of government. We have a good organisation, and I think people want to see a role for social democracy,” the Labour leader said.

There was no deputy leadership election after Mr Howlin took office, after a well-documented battle with Alan Kelly back in May – an episode he says he now “wants to put behind him”.

The reason for this, he says, is that he sees the party’s other six TDs as all being his “deputies”.

And as for the future, the Wexford TD appeared to rule out any role for Ms O’Sullivan in the leadership ranks at least under his watch, saying: “The structure I have presented with the party is to involve everybody – all the TDs, the Senators, our 50 councillors, but engaging with members as well. So in many ways, we will have a new flat organisation where everybody is absolutely involved in new ideas, in creating new policy and communicating that policy to more people.”

The structure that Mr Howlin is proposing – with members having a big say – appears to be the same approach the British Labour party leader Jeremy Corbyn is advocating.

Opinion polls show the divisive leader of the British opposition is on average 11 points adrift of the Conservative government.

This concerns Mr Howlin – who spoke at the British Labour conference.

“It’s even more striking if you look at England, where the battleground is after the rise of the Scottish Nats, and they are 25% behind. There are real issues which need to be addressed. I wish them every success, because God knows, it would be much better for Ireland, and Europe in general, if there was a strong Labour party in Britain,” he said, stopping short of offering an opinion on Mr Corbyn.

There was some controversy back in 2014, when, stood next to Mr Noonan after unveiling Budget 2015, Mr Howlin appeared to compare characters from ‘Love/Hate’ to natives of Limerick.

It came after reporters suggested the excise duty on cigarettes could be considered a ‘Nidge tax’, in that they encourage criminality.

Laughing about the episode, the Labour leader said: “It was a joke, no offence was ever intended. I think it was symptomatic of the relationship me and Michael had. In the greatest of crises, we also joked about a lot of things – including our colleagues, I might add!”