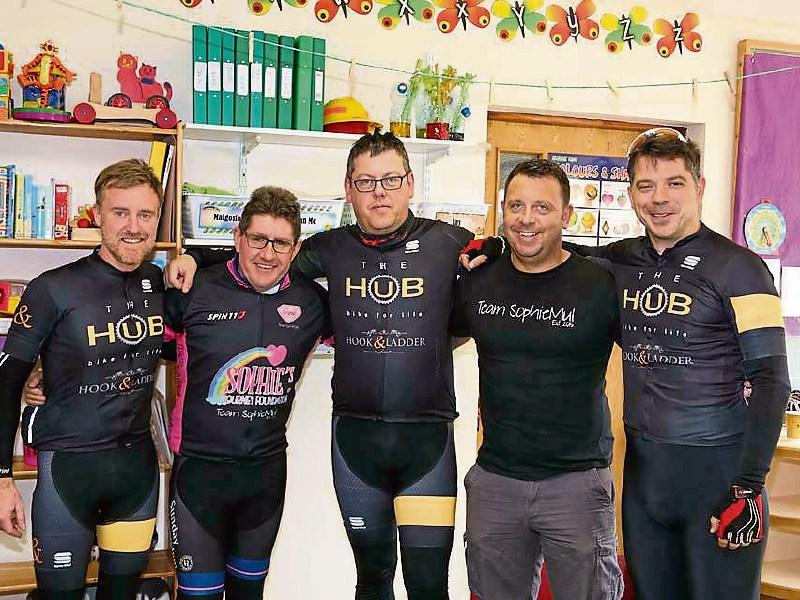 OVER 160 cyclists took part in the second annual Sophie Mulcahy memorial cycle, which has raised over €3,000 for a local Limerick charity.

The recent cycle, which was led by Irish journalist Paul Kimmage and former Olympian Philip Cassidy, was in memory of eight-year-old Sophie Mulcahy – a brave young Rhebogue girl who died two years from a rare medical condition known as 1Q43 deletion.

The 82km cycling event is supported by Sophie’s Journey Foundation, and with an entry fee of €20 per person, the funds will go to the much-loved St Gabriel’s School and Centre, Dooradoyle.

“It took place the week before Sophie’s birthday so we were anxious that we marked it in the best possible way. It was nice to be able to do it and to have such a good turnout,” said Liam Mulcahy, Sophie’s father and founder of the foundation.

“It was a great number for this time of year. It just goes to show that it’s a well-supported and good cause.

“A lot of local clubs and local people supported it and people travelled from places up the country like Dublin and Galway to support it as well.”

The cycle took off from Deebert House Hotel, Kilmallock last Sunday and from there, Paul Kimmage and Philip Cassidy led the 164 cyclists through Bruff, Croom, Patrickswell, Raheen and returned via the same route after a short refreshments stop in St Gabriel’s.

“We ended up going into St Gabriel’s as well so it was nice to promote the foundation and also to see what the school are doing,” explained Mr Mulcahy, who hails from Kilmallock.

St Gabriel’s School and Centre will put the much-needed funds towards the building of their new five-bedroom respite centre, which will provide overnight respite care for children with disabilities and their families.

Sophie attended the school during her short life.  She was one of only 40 people at the time who had the rare condition 1Q43 deletion, meaning that the cells of the body have a small but variable amount of genetic material missing from one of their chromosomes – chromosome 1.

She bravely battled her terminal illness for eight years before she passed away from kidney failure on October 22, 2014, leaving behind her loving family – father Liam, mother Stacey, brother Dion and sister Kayla.

Sophie’s parents have since set up the Sophie Journey Foundation, which aims to help and support sick children and their families.

To donate to the worthwhile charity, visit www.idonate.ie and select Sophie's Journey.