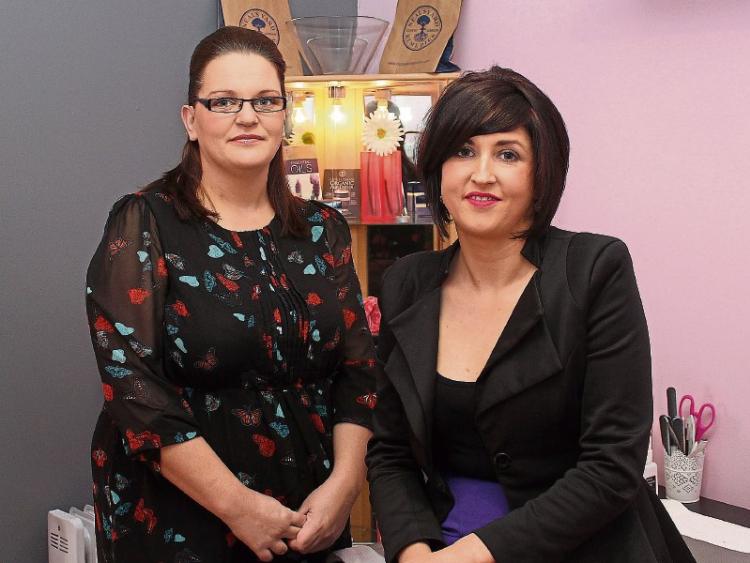 Lisa Shanahan, hairdresser, and Nessa Maher, beautician, who had her business broken into within a week of opening in 2013 and again last week

COLD-HEARTED criminals have targeted the business of a popular County Limerick beautician twice in the space of three years.

Nessa Maher, from Cappamore, opened up Nessa’s Beauty in Doon on November 1, 2013. Exactly a week later thieves broke in during the early hours of the morning and stole over €4,000 worth of her products.

As she was just open she hadn’t got insurance so had to bear the cost herself and get back on her feet. Then last week her premises was broken into again.

"I went in the following morning [last Wednesday], the back door was open and all the make-up was gone,” said Nessa.

The last time she said, “It felt like I was kicked in the stomach” and now she can’t find the words to express how upset she is.

“I don't know after this time now. I had only finished stocking everything up in June just gone. I had to go into town on Wednesday and buy everything, buy as much as I could out of what I had. Myself and my partner just bought a house last month so it was literally scrimping and saving everything.

“At least a thousand if not more was taken this time. I actually can't tot it up yet. It would send me over the edge if I do,” said Nessa.

Entry was gained through a tiny sky light. They rifled through her stock and stole MAC make-up, strip lashes and tanning products. Since news broke locally the response has been one of disgust at the crime and support of Nessa

"I've had loads of people ringing me and calling in, they're so good. Doon is great, just horrible people seem to visit us. There is great community spirit, there really is. People are so nice out here," said Nessa, who shares the premises with hairdresser Lisa Shanahan. She had a Samsung Galaxy J3 phone taken – the donated first prize in a hugely successful Brides and Bridesmaids party she ran to raise money for Breast Cancer Research.

Lisa says her heart goes out to Nessa.

“Once is bad enough, but twice… My heart is bleeding for her, it’s two hits in three years she is after getting.

“Doon is so good, they are great to support the two of us. Everyone is trying to help us if they can at all. Nessa is a great worker and is very busy. It’s just cruel for her to take this hit a second time," said Lisa.

Locals are hoping somebody may donate a new phone to replace the one that was stolen during the callous break-in.

There has been a crime wave in the locality in the past week. A quantity of diesel and farm tools were stolen on the same night – late Tuesday and early Wednesday morning, and a quad bike taken from a farm Cappamore on the previous Sunday night.

Bruff gardai are investigating and anybody with any information or has been offered any of these goods to contact them on (061) 382940.