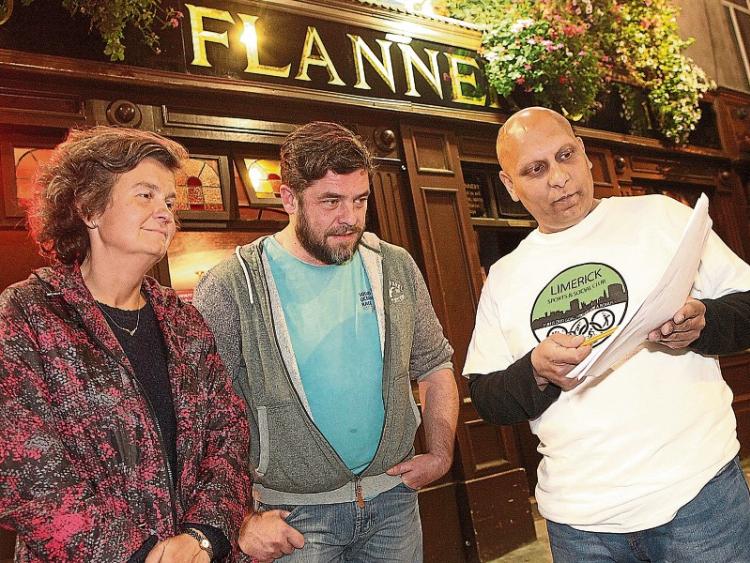 “SURE, isn’t this better than sitting at home watching telly,” smiles Grainne Madden, taking part in the inaugural event of a unique new club in the city.

Garryowen man John Mulligan has set up the Limerick Sports and Social Club, designed to bring people with similar interests together.

The first event was a sure fire winner – a pub treasure trail, with a number of historic city hostelries on the agenda. And the Leader came along.

“It is about bringing people together,” John said. “I have often complained that people just go home and lock their door, that they do not get involved in groups. People are starting to go back to the gym, but that is something you do on your own. I grew up with lots of different things going on about the place, but I don’t think the same thing happens now.”.

The Locke Bar, Flannery’s in Shannon Street, Timmy Martins, Tom Collins, Souths, the Windmill, the Old Stand Bar, and Willie Sextons were on the trail, with the group split into groups of three, and asked to visit three pubs apiece.

John designed the tour in the hope of getting people talking.

“With the information, and questions, to find the answers, you need to look at the walls, talk to the barman. Some of the questions, and the answers are not obvious,” he said.

Groups of friends were in attendance at the first night of the sports and social club.

John mixed them into groups where they did not know one another and sent them on their way. In the Leader’s case, we were tasked with finding clues in South’s, Sexton’s and Flannery’s Bar in Shannon Street.

In the first bar, we were asked questions of the first sitting of the Dail, and the horses the pub had in a syndicate.

Moving to Sexton’s, rugby was the order of the day, and despite a big crowd enjoying a pub quiz of their own, teacher Gary Digpal was surprised by the willingness of people to help our fly-by-night group out.

He said: “To be honest, people going out for a drink don’t want to be bombarded with questions – or at least I wouldn’t have thought so. But people have been really friendly, and I think they have enjoyed answering them.”

“I thought this group was an interesting concept, and definitely one which is needed to get people out and involved. Meeting people is difficult enough, so it was easy for me to get involved,” Annacotty man Gary added.

Grainne said: “When I read about this in the paper, I felt it was long overdue. Sometimes people who feel a bit isolated might need something like this.”

Arriving at the final pub on our mini-tour, Flannery’s, we were greeted with music from Tommy Goodwin.

“Let’s just forget about the quiz and listen to the music instead,” Grainne jokingly said.

But the quiz went on, and we were posed with the question of which shot costs €25 in the pub.

“I cannot give you the answer, but I can show you a menu,” the barman said, hinting at a rare Scottish whiskey.

Adjourning for a pint in Tom Collins afterwards, John tells me that he has big plans for Limerick Sports and Social Club.

He said: “I like to play chess, but there is no place to do this. I know there are people out there who like to go to the pictures. Some people might not have a friend to go with on a particular night, so they can join in with us. We all have individual friends, but they are not always available.” Walks, historical tours, ten-pin bowling, and all manner of other events are planned.

And judging by the success of the first night of the club, it appears the Sports and Social Club has a bright future.