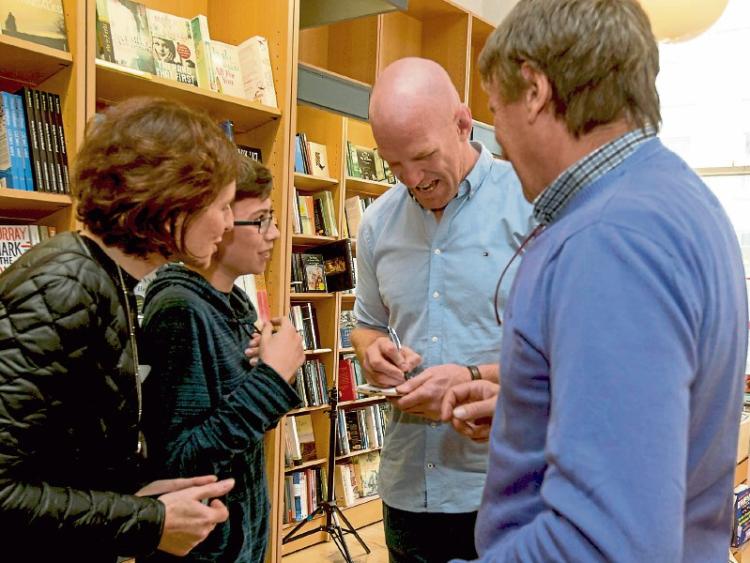 Paul signs an autograph for Sinead and her son Hugh Lawler, watched by David O’Mahony at the book signing

RUGBY legend Paul O'Connell has laughed off suggestions he could make a move into politics, as speculation continues about his next career move.

O’Connell, who has just published his autobiography The Battle, told the Limerick Leader that a move to the Dail is unlikely.

Asked about his plans for the future, he said: “That’s the big question. I’m enjoying what I’m doing at the moment – with the Academy in Munster, and it’s been a busy time with the book, and after that I’ll have a bit of time then.

Minister for Finance Michael Noonan said he had heard speculation about O’Connell’s potential foray into politics.

Deputy Willie O’Dea said he doesn’t think Fianna Fail have made approaches to O’Connell, but said he would undoubtedly do well as he’s “very personable, highly respected, hugely popular and instantly recognisable. He could top the polls ahead of anybody.”

Some 800 people enjoyed a 'meet and greet' with the Munster and Irish rugby legend at his recent book signing in O'Mahony's.

Frank O’Mahony, of the store, said the queue was “absolutely massive” and said he hadn’t seen scenes like it since Jack Charlton’s book signing in the city, or the first book signing by broadcaster Gay Byrne.

With typical O’Connell modesty, when asked how he felt about the phenomenal turnout, he joked that the book might be an easy Christmas present for people, as many queued to purchase several books for friends and family members.

“It’s great. These are all Munster and Ireland rugby fans, so hopefully the story will be interesting for them. I’m happy with the reaction. We put a lot of work into it and it took a long time to get it to where we got to. You never know how people will react to it. It’s a good book and I think people will enjoy it,” he said.

The Battle was co-written with Alan English, former editor of the Limerick Leader and current editorial director of Iconic Newspapers, which own the Leader. He also attended the signing along with many family members.

- See Leader 2 in the weekend broadsheet for a feature on the inside track on the writing of The Battle, with Paul and co-author Alan English. In shops now