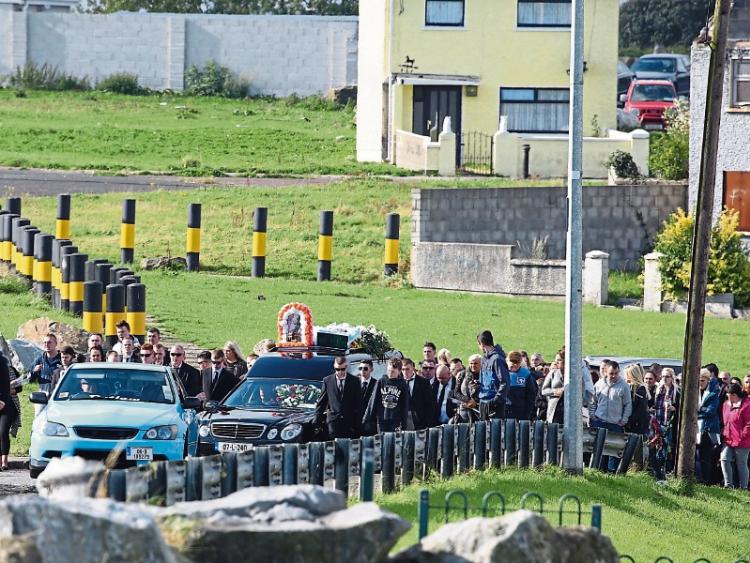 GARDAI say they are aware of a number incidents which happened in-and-around the removal and funeral of Christopher ‘Guna’ Curtin who died in road accident in County Limerick last week.

The 22-year-old from Salvia Court, Keyes Park, Southill suffered fatal injuries when the car he was travelling in left the road and struck a ditch on the Fedamore to Limerick road shortly after 2am on October 4, last.

A woman who was also in the car was treated at University Hospital Limerick but her injuries were not life-threatening.

Investigations into the collision are continuing and files will be prepared by gardai for both the coroner and the Director of Public Prosecutions.

Curtin, who had around 40 previous convictions, was disqualified from driving for 25 years a number of years ago and was “well-known” to gardai.

Several videos have appeared on social media over the past week which appear to show mourners at his removal watching on as so called ‘doughnuts’ are performed at O’Malley Park – near the Holy Family Church.

In one video, recorded on the night of Curtin’s removal, large crowds of young people can be seen watching on as the driver of a cyan blue car performs a number of manoeuvres in the middle of the road.

The 00 D-registered car can be seen ‘drifting’ along the main road and at one point it mounts a footpath.

Smoke can also be seen bellowing from the tyres as several ‘doughnuts’ are performed while a passenger appears to be hanging out the window recording on a mobile phone.

”R.I.P Guna you got A lovely send off,” reads the caption posted with the video which has been viewed almost 3,000 times.

While gardai are not seen on the video footage, the Limerick Leader understands they maintained a discreet presence during the removal and funeral.

Gardai say they are also aware that a number of cars were reportedly burned out in O’Malley Park on the day of Curtin’s funeral.

It is understood investigations have been launched.