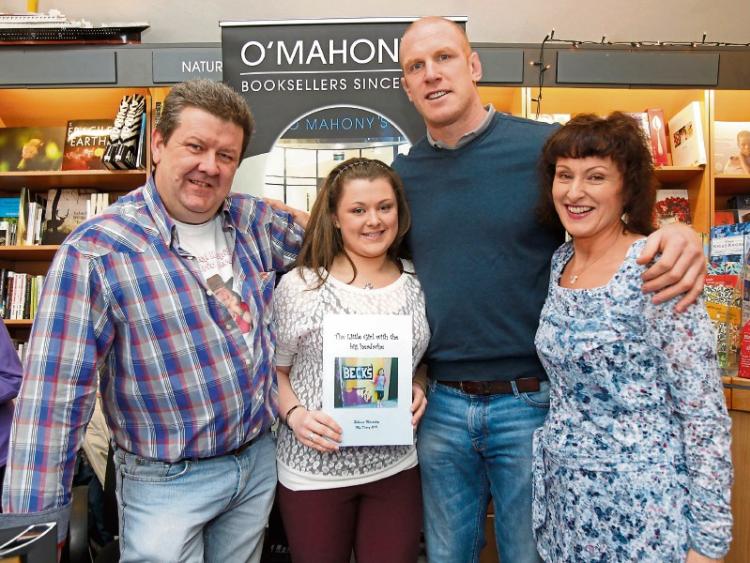 Paul O’Connell at the relaunch of The Little Girl with the Big Headache, the story of the late Becky MacAuley’s treatment, pictured with her dad Mike, mum Mary and sister Rachel

EVERY year since her death, mum Mary and daugher Rachel have lined up at the starting line in Castletroy to remember beloved Becky.

In 2012, Becky MacAuley, who was aged just 11, died following a battle with two brain tumours.

The brave young girl even wrote a book, The Little Girl with the Big Headache, with all proceeds going to a children's oncology fund.

Between the book sales, and the funds they have raised through the mini marathon, the family has now succeeded in raising some €25,000 to aid cancer services in Limerick.

“Becky did it herself five years ago, and we wanted to continue it after her, to help people who have to travel outside their own area at short notice for emergency treatment,” mum Mary told the Leader.

A group of 20 friends will take part in the race this year, and of particular symbolism to them, on the backs of their t-shirts will be the number 55.

Before she passed away, her friends in the Limerick Celtics Basketball Club presented her with a shirt numbered 55 – in recognition of the number of stitches Becky received after undergoing surgery. It is a number the family now can’t help but see wherever they go.

The fourth-class student who attended St Nessan’s National School was first diagnosed with a brain tumour in April 2011 and had to undergo surgery and chemotherapy. A second tumour was discovered some months later and she had to undergo further surgery. She passed away on August 10, 2012.

Now, her mother and sister Rachel, 19, are continuing on her work, and again taking part in the Cook Medical Limerick Women’s Mini Marathon to raise funds for the paediatric oncology unit at the University Hospital Limerick.

Over 1,800 women have now signed up to take in the Cook Medical Limerick women's mini marathon on Sunday, October 30, and the organisers expect to reach a record 3,000 on the day.

Hundreds of people are running for numerous charities, including the Mid-West Rape Crisis Centre, Limerick Marine Search & Rescue, in memory of Becky MacAuley and to support cancer services for children, Honouring Aaron, Grow Ireland, Our Lady's Hospital in Crumlin, and the Irish Children's Arthritis Network.

Up to 100 students at Laurel Hill school are also taking part in the race to raise funds for the oncology unit at University Hospital Limerick.

Registrations will be taken right up until the day and organiser John Cleary anticipates that it could sell-out.

The race is the main fundraising event for Limerick AC, which has handed over its organisation to Mr Cleary, who also leads the Barringtons Great Limerick Run, which is entering its eighth year in 2017. Registrations for that race have also already opened.

This year’s mini marathon is being run in memory of Gemma Carcaterra, a 42 year-old  keen runner and active participant in the Women’s Mini Marathon.

She last took part in the event in 2015 when her baby triplets were less than three months old, and died suddenly six months after they were born.

Three stars can be found on the back of all commemorative t-shirts this year in honour of Gemma's three kids,  Ava, Riona and Coen who turned one in August.

To make a contribution see https://www.gofundme.com/Gemmastribute