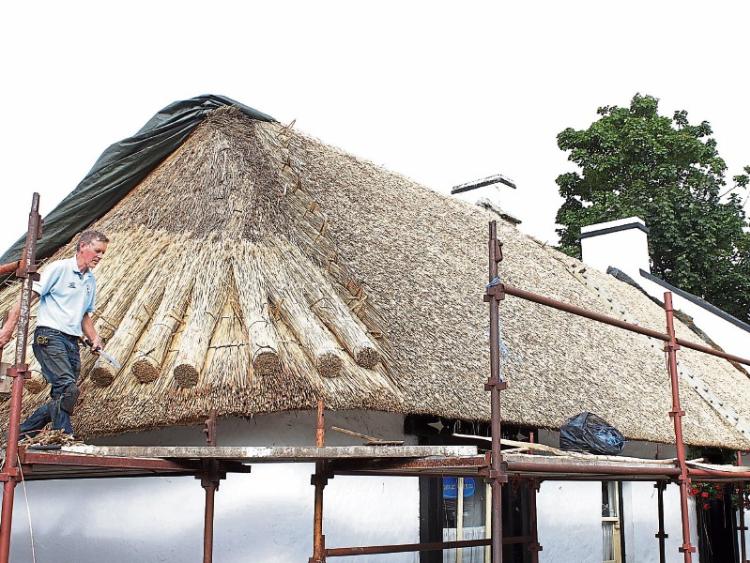 Up on the roof: Tomás Collins has been busy working for weeks in Boher Picture: Michael Cowhey

IN THIS fast changing world dominated by technology it is nice that some things, at least, haven’t changed in centuries.

Anybody driving on the N24 in the past month would have noticed scaffolding at Pa McGrath’s pub in Boher and a man on the roof weaving some magic.

Tomás Collins is a master thatcher from Sixmilebridge but living in Meelick. The 64-year-old learned the skill as a boy.

“I learned to thatch on the homeplace. My father told me ‘get up there and do it’.”

Tomás as been working full-time at the trade for the last 33 years.

“There's always loads of work on - it’s at the stage now where I have to turn down jobs,” said Tomás, who has become well acquainted with Boher as before he started on Pa McGrath’s he did the ridge on O’Neill’s bar.

“There aren’t too many thatched pubs so they are lovely to see. The longevity depends on the quality of the reeds and the roof, the location and, obviously, the workmanship.

“I strip it off as I go, a certain area of it and I renew any holes or hollows. You have a good sound base underneath it, I make that good and lay on a new coat of reed over that area, it goes up in courses, step by step. My ridges are lasting about 10 years,” said Tomás. And the roof itself lasts much longer.

One problem he faces is the Irish weather because when it rains he just has to cover up and stop. But it will always be nice inside.

“It’s warm in the winter and cool in the summer. There could be a storm blowing outside and you wouldn’t hear a thing.”

Tomás has a simple answer when asked about them being an increased fire risk.

“It will go on fire if you set fire to it! The modern stoves go over 1,000 degrees and that will spontaneously combust the reed if there’s any weakness in the chimney. If you have a good clean chimney with no sparks coming out of it you should be fine.”

Thankfully it has never happened in Pa McGrath’s. Proprietor for close to 40 years, Liam Lynch said the building dates back to the 1700s.

While he would never change it he says thatching is very expensive and there are insurance issues.

“It is a strong selling point – it helps the place to stand out but it is very expensive. This is my fourth time doing it. The ongoing cost would be around €4,000 a year. There is help from the council but the grant is quite small in comparison to the overall cost of maintaining it.

“Insurance is a huge issue too. We’re not too bad as we are in business a good few years and we have no history of claims but certainly people who acquired a thatched house that hadn’t owned one previously are finding it very difficult to get insurance,” said Liam, who is looking forward to the scaffolding coming down.