Hundreds turn out for Paul O'Connell book signing in Limerick 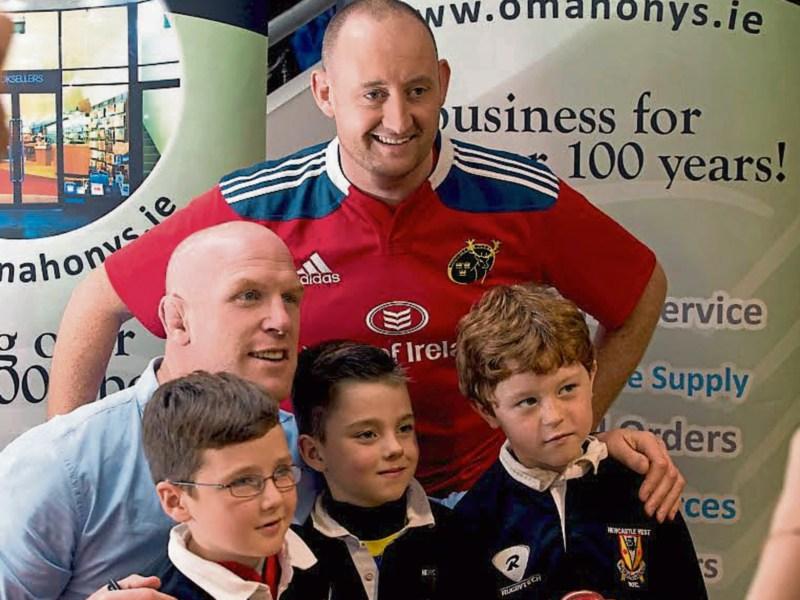 THEY queued for four hours in advance to meet the man who in Munster and Ireland rugby circles is the closest thing to God himself.

Over 500 people queued for hours to meet former rugby legend Paul O’Connell at his book signing in Limerick city this Sunday, eager to clinch a signed copy of his book The Battle.

First in the queue at 10.30am was Amanda Dooley, from Clarina.

“I’m just mad about him. He’s my number one,” she said, having bagged the seat closest to him, and surveying the crowds in O’Mahony’s bookstore.

“It’s brilliant. It’s great for him in fairness. As long as I get a picture and a signing I’ll be very happy,” she enthused.

She was followed by Bernard Kennedy, from Ballinacurra Gardens, who played rugby for Young Munster in the “amateur days, the old time”.

“I used to see Paul’s father Mick play. Paul O’Connell has put Young Munster, Munster, and Ireland on the world map. He’s such a nice guy, and is always easy to approach. I’ve two books to get them autographed – one for me and one for my son Barry,” he said.

Frank O’Mahony, of the store, said the queue was “absolutely massive” and said he hasn’t seen scenes like it since Jack Charlton’s book signing in the city, or the first book signing by broadcaster Gay Byrne.

The book signing was due to begin at 2pm, however after The Battle author observed images of the lengthy queues on social media, he arrived early so as not to disappoint fans on his home ground in the Treaty City.

He was due to sign books for approximately two hours, but due to huge demand he was expected to remain in O’Mahony’s on O’Connell Street until around 5.30pm this evening.

Even before he was due to meet his legions of fans, he had planned to sign more than 200 copies of The Battle, which were pre-ordered by customers who couldn’t attend the signing.

With typical O’Connell modesty, when asked how he felt about the phenomenal turnout, he joked that the book might be an easy Christmas present for people, as many queued to purchase several books for friends and family members.

“It’s great. These are all Munster and Ireland rugby fans, so hopefully the story will be interesting for them. I’m happy with the reaction. We put a lot of work into it and it took a long time to get it to where we got to. You never know how people will react to it. It’s a good book and I think people will enjoy it,” he told the Limerick Leader this afternoon.

The Battle was co-written with Alan English, former editor of the Limerick Leader and current editorial director of Iconic Newspapers, which own the Leader. He also attended the signing along with many family members.

Three potential followers in O’Connell’s footsteps also couldn’t contain their excitement as they prepared to meet their idol.

Darragh Liston, James Fitzgerald, and Mark Cussen, of the under-8 rugby club in Newcastle West, donned their rugby jerseys for the signing.

“We’re just after coming from Nenagh from an under-8 blitz. We’d three games there, and we’re taking them in now to see Paul O’Connell. They are big fans. If you’re from Limerick, you’re a fan of Paul O’Connell,” said John Liston, of the club.

Mum Rachel O’Neill, from Ballybricken, brought her sons Pierce, 11, and Rory, 9, who play with Old Crescent RFC, to meet him, and he signed the backs of the Irish rugby jerseys in addition to the book.

They were even allowed to stay up late to watch him on The Late Late Show on Friday night.

.@Paul_OConnell on why the injury that ended his career was probably for the best #latelate https://t.co/VeGPsnjX0P

“He’s wonderful and a gentleman. He’s really a great ambassador for the boys, a real role model,” she said.

Paul will be signing copies of The Battle in London this coming Tuesday, followed by Easons in Cork on Saturday next, and he will be back in Limerick on Saturday, December 3, from 2pm.