JT McNamara honoured for his heroism and courage at Press Ball 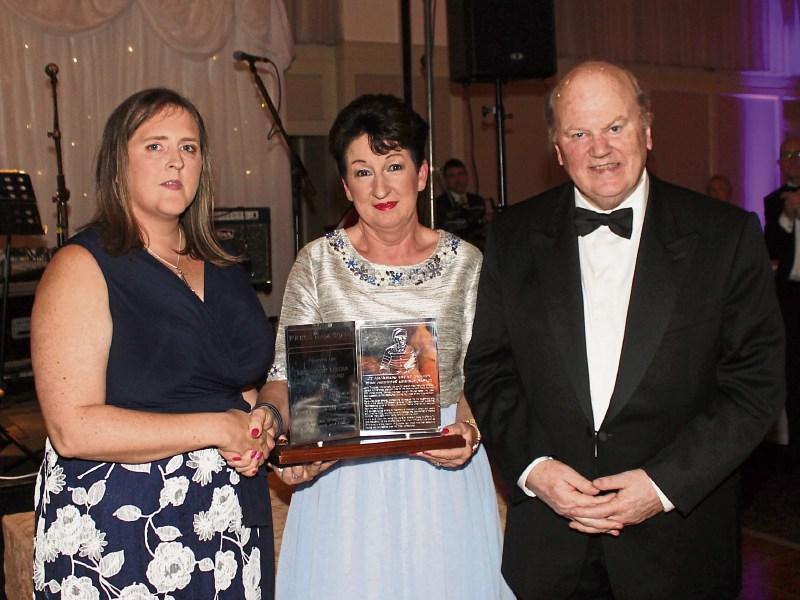 Caroline McNamara, wife of the late JT, is presented with the Mid West Media Merit Award by Minister Michael Noonan and Rose Hynes, chairman of the Shannon Group, which sponsored the award

THE widow of jockey John Thomas McNamara has praised the work being done day-in day-out by charities and voluntary organisations across the country.

Caroline McNamara made her comments at the weekend after she accepted the Mid West Media Merit Award on behalf of her late husband at the 2016 Press Ball.

The father-of-three, who died at his home in Croom last July, was chosen for the award for the heroism and courage he showed in battling injuries he sustained in an horrific fall at Cheltenham three years ago.

After accepting the award from Minister Michael Noonan and Rose Hynes, chairman of the Shannon group, Caroline McNamara said that, thanks to the support and giving of many, everything that could be done was done for her late husband.

“John was someone who never sought the limelight and would want his achievements to define his life not the accident that caused him to be paralysed and dependent on a ventilator to breathe and which cut his life so short,” she said.

“Fundraising is paramount for so many charities and without the immense fundraising that was done for John when he had his accident he would not have been able to return home and live in his life with us - his family,” she added as she received a standing ovation from the more than 300 people who attended the charity event.

People from across the region attended this year’s Press Ball with the proceeds going to a number of local charities including the Childrens’ Ark, the Neonatal Unit and CARI.

Since the first Press Ball was held in 1951, hundreds of thousands of euro has been raised for charities and voluntary bodies across the Mid-West region.

“The success of the Press Ball translates into money - money for deserving charities and voluntary groups throughout the Mid West. The support for the Press Ball is from the region and the money goes back to the region,” said Ron Kirwan, chairman of the organising committee.

While the total amount of money raised by this year’s Press Ball will not be confirmed for a number of weeks it is expected to be in the region of €20,000.

In his keynote speech, Finance Minister Michael Noonan spoke of the important role the media has to play in current times.

“Media is very important to us, the media provides us with a public face of the region and we are fortunate to have a very good media in Limerick - all organs of the media, representatives of national media and very strong local media as well and it’s absolutely essential to have a strong media for the sake of the social and economic life of the city and of the wider region,” though regarding his health he quipped: “You shouldn’t believe everything you read in the papers!”

Broadcaster Len Dinneen and journalist Tony Mulvey of the Clare Champion received special awards on the night to “mark and celebrate their contributions to the industry”.

Len has been a familiar voice on local radio in Limerick for more than four decades while Tony has been a stalwart of the Clare Champion for 58 years.

Minister for Finance Michael Noonan used his keynote speech at the Press Ball to highlight the challenges which “traditional” media organisations are facing.

“I’m not saying your industry is under threat but like many other industries in the world the technological revolution is having a disruptive effect on the way that you do business.

The Limerick city TD told guests at the Strand Hotel he and his government colleagues value the role media organisations play and are acutely aware of the challenges they face.

While not making any promises, the minister said he has held discussions with representatives of the “various units of commercial media” in Ireland and is considering the establishment of a working group which could address various issues and challenges facing traditional media.

Commenting that many media organisations have developed online strategies, Mr Noonan warned that under current EU rules ‘electronic media’ outlets are liable for VAT at the standard rate of 23% while the ‘print media’ pays 9%.

“I have been in discussions already with the various units of commercial media in Ireland and we get the flexibility (from the EU in an upcoming report) we will use it,” he said.