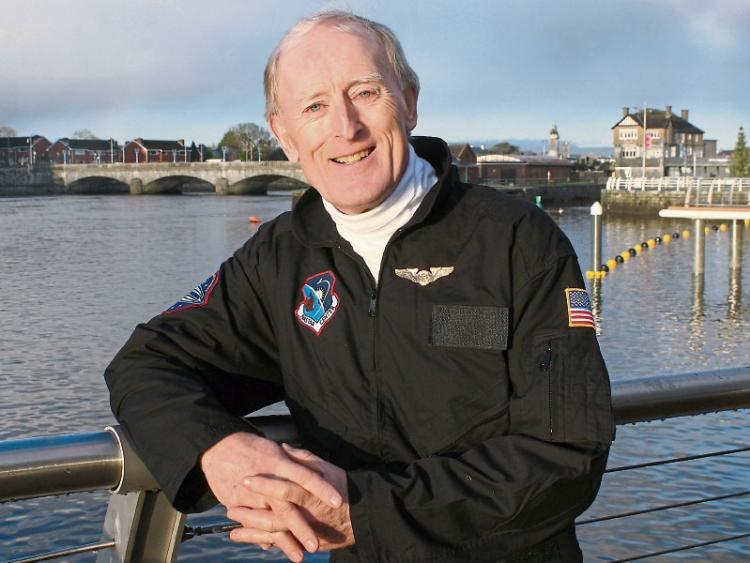 Cyril Bennis, from the Fairgreen in Limerick city, hasn’t lost hope that he will reach space

HE COULD be 70 by the time he achieves his life-time goal to reach space, but Cyril Bennis has vowed that he is not giving up.

Originally from the Fairgreen in Limerick city, Cyril, who turns 68 next month, has, alongside former Boomtown Rat and Live Aid organiser  Sir Bob Geldof, been on a quest to become the first Irishman in space, and to date has spent more than €130,000 in his bid to do so.

Cyril, who is a former Lord Mayor of Stratford-upon-Avon in England, “signed his life away” with a 12-page contract in 2014 – now all that remains is a date.

The contract places him in the seventh slot to reach space in a Lynx Mark I shuttle, with XCor Aerospace in California, which is offering commercial space travel.

Four years his junior, Geldof, 64, has been frequently touted to become the first Irishman to reach space, but it is anticipated that he is due to board a later flight on the Lynx Mark II shuttle.

Commenting in Limerick this week on who could reach space first, he said: “Sir Bob is out there too [in the race], but space is big enough for both of us. I’ve never met him but I’d love to meet him.”

“I still haven’t got a date [to reach space], but I have more training to do. It is an exciting era for space travel, but safety is number one. It’s not a trial run, so I understand the delays. Safety is certainly paramount.”  To prepare for his mission, Cyril recently completed jetfighter training in Los Angeles, at speeds of some 200 miles an hour to help prepare him for take-off.

“My body has to be able to withstand the pressures of speed, and I’ve had about four years of training now. The next is super-sonic training, which will be a big test [at 768 mph]. It has been a long journey. I’ve waited 50 years, so I can wait another few years. It is taking some time, but no one ever said it was going to be an easy process,” he told the Limerick Leader. He recalled the visit of astronaut John Glenn to CBS Sexton Street, after becoming the first American to orbit the earth in 1962 as his inspiration. Cyril will be taking about his mission this Wednesday night in the LIT Millennium Theatre at 8pm, alongside NASA astronaut Al Worden and space enthusiast Dr Niamh Shaw of LIT. Tickets cost €5.