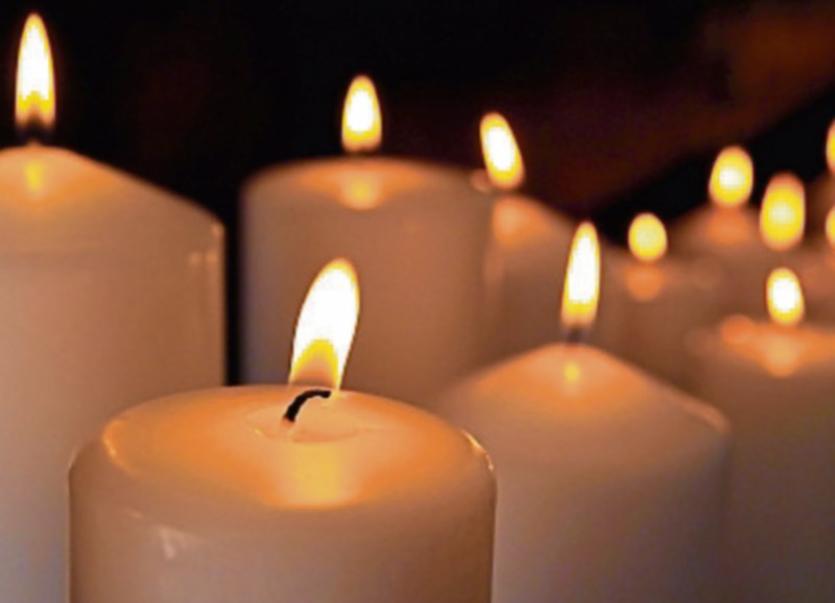 THE peaceful death has occurred of Nancy Sheahan (née Fitzgerald) of Croaghane, Foynes.

Reposing at her residence on Saturday from 4.00 until 7pm. Removal on Sunday to Robertstown Church to arrive for 10.30am Requiem Mass. Burial afterwards in Robertstown Cemetery.

Reposing at Cross' Funeral Home, Sunday, from 4.30pm followed by removal at 6pm to St Joseph's Church, O'Connell Avenue. Requiem Mass, Monday, at 11.30am followed by burial in Castlemungret Cemetery.

Reposing at Thompson’s Funeral Home, Thomas Street this Sunday evening from 4.30pm to 6pm followed by removal to the Dominican Church. Requiem Mass on Monday at 10.30am with burial afterwards in Mt St Oliver Cemetery.

Anne Devereux (née Kennedy), of Kennedy Park and late of Riverdale Nursing Home has died. Wife of the late Eamonn.

Reposing at Cross's Funeral Home on Monday from 5pm with removal at 7pm to Our Lady Queen of Peace Church. Requiem Mass on Tuesday at 11am with burial afterwards in Mt St Oliver Cemetery. No flowers please. Donations if desired to the Alzheimer's Society.

Reposing at Cross's Funeral Home on Monday from 5.30pm with removal at 6.30pm to St Munchin's Church, Clancy's Strand. Requiem Mass on Tuesday at 11am with cremation afterwards at the Island Crematorium, Ringaskiddy, Co Cork at 3pm. Family flowers only please. Donations if desired to Milford Care Centre.

Reposing at Cross' Funeral Home, Tuesday, from 5pm followed by removal at 6.30pm to St. John's Cathedral. Requiem Mass, Wednesday, at 11am followed by burial in Castlemungret Cemetery.

The death has occurred of Julie Ryan (née Martin) of Cosgrove Park, Moyross and Ballinacurra Weston. Peacefully, at her residence.

The death has occurred of retired commandant John Barry, of Blackrock and late of Limerick October 1 (peacefully) after an illness, borne bravely in the tender care of all the staff of St Vincent’s Hospital. Beloved husband of Nicola, loving father of Eoghan, Sarah and Hugh.

Reposing Monday in Quinn’s of Glasthule from 5pm to 7pm. Removal on Tuesday to The Church of the Assumption, Booterstown, arriving at 11.20am for 11.30am Funeral Mass, followed by cremation in Mount Jerome Crematorium. Family flowers please.

Reposing at Delany-Minihan's Funeral Home, Newport on Tuesday evening from 6pm followed by removal at 7:30pm to St. Joseph's Church, Castleconnell. Requiem Mass on Wednesday at 11:30 am. Burial afterwards in Stradbally Cemetery, Castleconnell.

Reposing at Thompson’s Funeral Home, Thomas Street this Tuesday evening from 5.00pm to 6.30pm followed by removal to St Joseph’s Church, O’Connell Avenue. Requiem Mass on Wednesday at 11.30am followed by private cremation on Thursday. Family flowers only. Donations if desired to the Irish Heart Foundation.

The death has occurred of Peggy Cronin (née O'Brien), of Sherins Cross, Kilmallock. Peggy passed away very peacefully on October 2 in the tender and loving care of the Matron and Staff of the Maria Goretti Nursing Home, Kilmallock, predeceased by her husband Ged.

Reposing this Tuesday evening from 6.00pm at Daffys Funeral Home, Kilmallock followed by removal at 7.30pm to the Church of the Holy Trinity, Dromin. Funeral Wednesday after 12.00 noon Requiem Mass followed by burial afterwards in Dromin Cemetery.