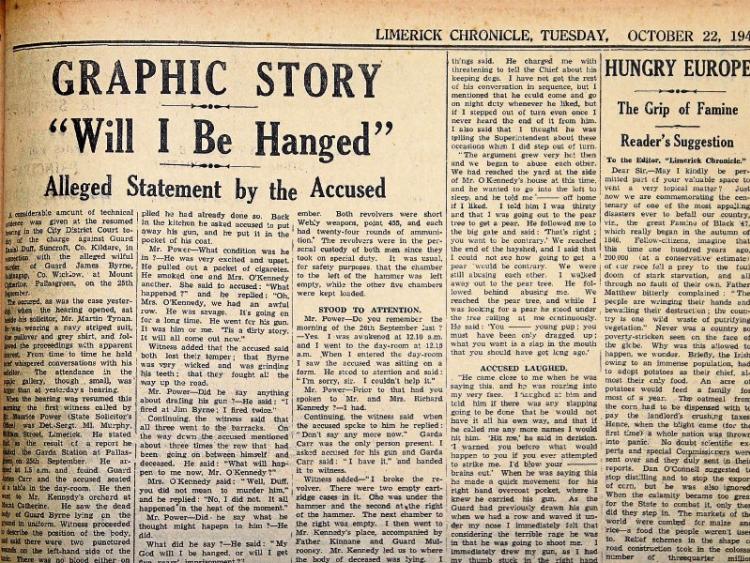 The Limerick Chronicle, on October 22, 1946 published a detailed court report, surrounding the murder of Gda Jim Byrne. Below, Patrick Kelleher

IT was 70 years ago, near midnight, and a lukewarm, south-easterly breeze swept through the pastoral landscape of Mount Catherine — a hushed part of Pallasgreen where there were, at most, a dozen inhabitants.

Before retiring to bed, labourer William Ryan and postman James O’Donnell heard two distant bangs, but for farmer Richard O’Kennedy and his wife, the noise was loud and near.

The two dismissed it as the usual crashing of the stable doors, until they heard screaming from outside their second storey window.

“Mr O’Kennedy, get up quick, I shot Gda Byrne.”

From that moment, a “deep shadow” cast over Pallasgreen — after rookie Gda Daniel Duff shot dead his partner on duty, Gda Jim Byrne, following a “savage row” on September 25, 1946.

Less than two months after that fatal event, Duff was charged at Limerick District Court, and was convicted of murder at the Central Criminal Court, narrowly avoiding a death sentence at the gallows.

He was sentenced to death, however this was commuted to penal servitude for a number of years.

Duff and Gda Byrne had been working the night shifts together for nine months, stationed at O’Kennedy’s orchard. They were assigned to protect the property against a “lunatic” who had accused the couple of land-grabbing, 10 years after the controversial Land Commission had purchased the large farm.

“We saw the friction between Dan and Jim Byrne, and Dan would give us a hint that he wasn’t getting on with Byrne,” said author Patrick Kelleher, whose father was the barracks sergeant in Pallasgreen, then. 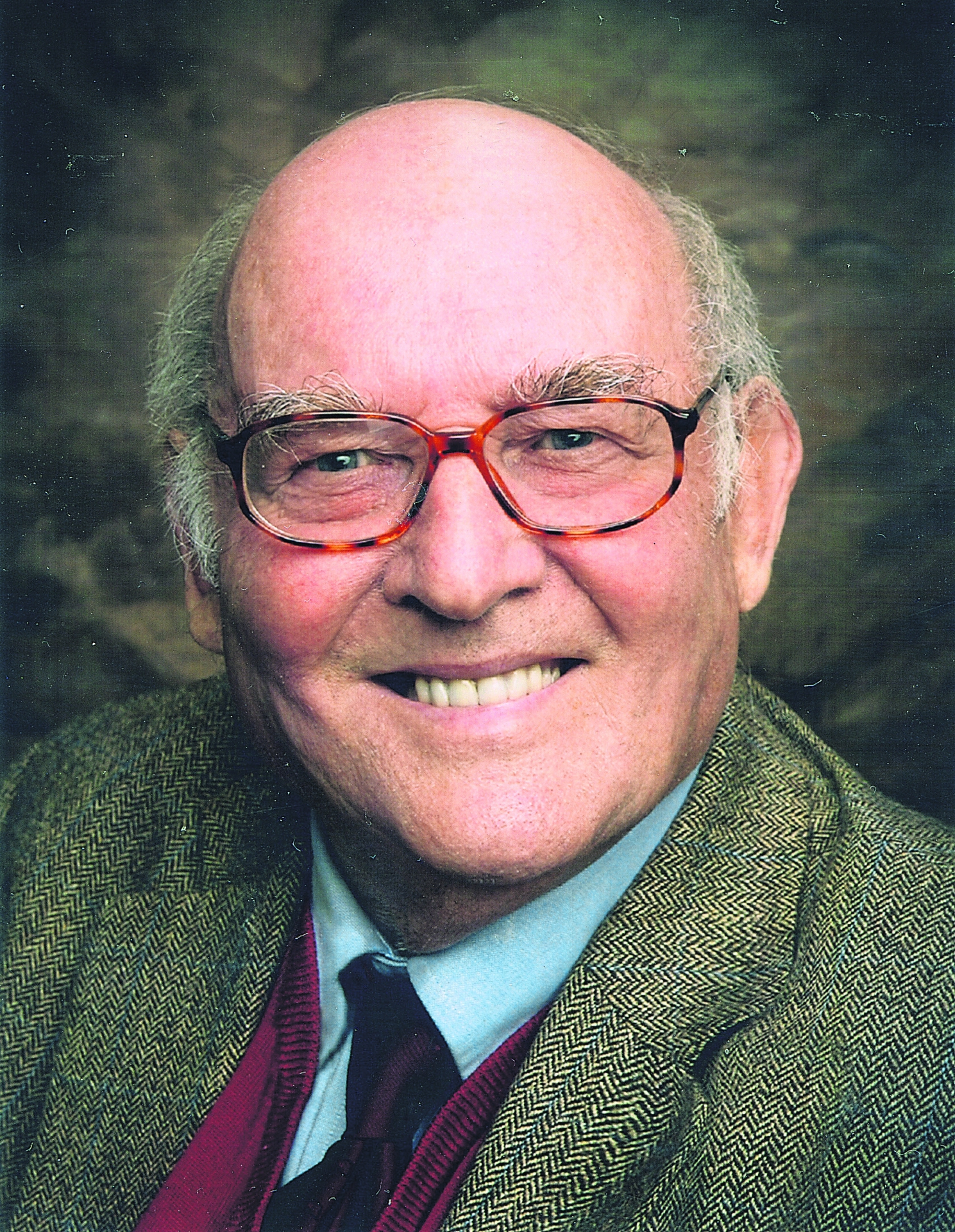 Patrick, 85, witnessed the mournful lull in the quaint village the next morning, as a deluge of crime bureaus from William Street barracks and beyond flooded the community, to investigate one of the most unique murder cases in 20th century Ireland.

Keeping his notes from that period, Patrick published One Mortal Night: A Miscarriage of Justice in 2011, arguing that Duff should have instead been convicted of manslaughter.

He said that Gda Byrne, 39, “didn’t relate well to many people”, and walked the superintendent’s greyhounds before starting the late shift. Young Duff, 22, wrote poetry as Gaeilge, was a tenor singer and an artist.

Also extensively detailing the controversial saga, at the time, were the newsmen at the Limerick Chronicle.

On September 27, Duff arrived at Limerick District Court, in a saloon car, to be officially charged with the murder of Gda Jim Byrne. Brought in by garda escort, the silent Kildare native wore a navy-blue suit and a light-coloured rain coat. Spending “very little time” consulting with his solicitor, Duff was then remanded in Limerick Prison, ahead of the first hearing on October 21, 1946.

On this day, all statements were revealed to the small gathering in the public gallery.

After leaving Sgt Kelleher’s house at 11pm, the two gardaí made their way to the Mount Catherine orchard. Earlier that day they had paid a visit to their local pub for a stout.

After a quick chat with the local thatcher, Jerry Coffey, they entered O’Kennedy’s farm, but did not state their arrival. Up until that point, the co-workers were engaging in light banter and were discussing their late shifts. According to the crime author, they were on the farm shift for too long, and should have been assigned to another job after six months.

Gda Byrne, who was friendly with the superintendent, told Duff that he would not have been cut out for the night shifts at his previous station, in Farronfore, Kerry. In a statement, Duff said: “I said I wouldn’t mind doing night duty any place, that it was all right when you became used to doing it here.’ Then I said: ‘I think the same thing would apply to you, but, of course, you need not care; you have the superintendent on your side.’”

After this, the courthouse heard, an argument ensued and grew “very hot and we began to abuse each other”. Duff, walking to the crime scene, said that he was thirsty and wanted to a grab a pear from one of the trees in the orchard. He told the court that he was continuously waylaid by the “abusive” senior garda.

“You — young pup; you must have only been dragged up; what you want is a slap in the mouth that you should have got a long time ago,” Gda Byrne said to Duff, underneath the pear tree.

After a heated few seconds, Duff — thinking Gda Byrne was looking to draw his gun — quickly whipped out a Webley revolver and shot his partner twice in the heart.

He said that when he saw the victim fall, it “dispelled my anger immediately”, and he said an Act of Contrition for Gda Byrne.

He darted towards O’Kennedy’s large farm house, calling for help. When the farmer opened the front door, the garda jumped into the hallway, clasping onto the gun that killed Jim Byrne.

“I shot Jim Byrne, Mr O’Kennedy. He’s dead. I had an awful row with him,” he said, as his wife rushed down the stairs. Beckoned into the kitchen, the couple quizzed an “excited and upset” Duff about the incident, and followed him to the bloodied stems of the pear tree, where they found Gda Byrne’s remains.

The wife told the Limerick District Court that she smoked a cigarette with Duff. When she asked what happened, he replied: “Oh, Mrs O’Kennedy, we had an awful row. He was savage. It’s going on for a long time. He went for his gun. It was him or me. ‘Tis a dirty story.”

The three then decided to walk together to Pallasgreen garda station. During the walk, a frightened Duff said to the couple: “What will happen to me now, Mr O’Kennedy?”

“Well, you did not mean to murder him,” he said to Duff, to which he responded: “It all happened in the heat of the moment. My God, will I be hanged or will I get five years?”

Manning the local barracks for the night was Gda James Carr, who took Duff’s gun, and called Sgt Jim Kelleher and Chief Supt Dirreen, who led the investigation for the next eight weeks. The author, who now lives in Dublin, said that he concluded — as did “most of the readers” — that Duff should have been convicted of manslaughter.

“The men at the station saw it escalate, and probably should have seen that Dan was so highly-strung. It was unfortunate, on that night, that Byrne started to insult him, that night on the farm.”

He said that Duff led a “very sad life” after his release, and died of cancer in his 60s.

But Patrick said that the real truth behind Duff’s and Byrne’s relationship will never be told. He said that his father, though he was a key witness in the case, “never disclosed anything. I was so young anyway. He probably disclosed it to my mother, but never to me, what he really thought was going on, and what the cause of it was, and how guilty — or otherwise — Duff was. I would have a lot of unanswered questions that I would like to ask my father.”

One Mortal Night was published by Somerville Press.