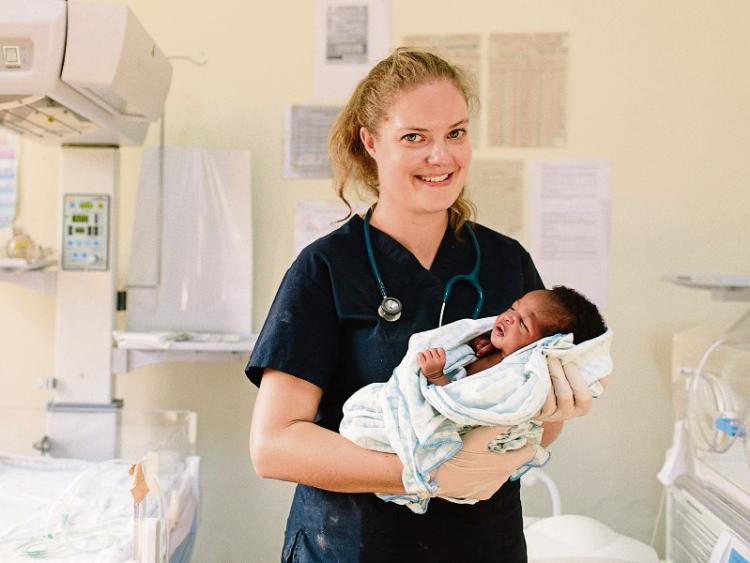 Dr Aisling Walsh pictured caring for a baby in Gulu, Uganda, where she was based for six months as part of her training. She is now working at Our Lady’s Children’s Hospital, Crumlin

ACROSS the dusty, red terrain in Gulu, a doctor from Castleconnell makes her way to work, some 10,000km from home, leaving before 8am to care for the most vulnerable of human beings.

Gulu, in northern Uganda, some 340km from the capital Kampala, is still recovering from a chequered past of British colonial rule, the rise of rebel groups and resistance armies, genocide and the abduction of over 25,000 children during one of the worst periods in its history.

After six months of being based in the Gulu Regional Referral Hospital, where she volunteered as Hospital Maternal, Neonatal and Child Health Advisor for six months, it has been an education in many ways for Dr Aisling Walsh.

Its population may be the size of county Limerick, but it is a world apart in terms of the challenges its faces in maternity care.

“I have learned a lot about the strength of people and their ability to cope in difficult circumstances,” she told the Limerick Leader.

“Despite all of the problems, the mothers and staff do everything in their power to help their newborns. They never complain and are always friendly and look on the bright side of every situation."

Many of the mothers, she said, live far away from a health centre and they don’t have the means or money to travel to a health centre to give birth, so many women still deliver at home – without a skilled birth attendant at delivery.

There are many challenges. The health centres are understaffed – many only have one midwife who is expected to provide 24/7 care. There are also infrastructural problems, as most health centres have no consistent power or water supply. There is also a lack of basic equipment, even gloves and towels, and a shortage of emergency supplies, including blood and medicines.

Explaining a day in her life in Gulu, she said: “I went in in the morning between 8-8.30 for nursing handover. Then I would do a ward round with the intern doctor. We would see all the babies in the neonatal unit and discharge any that were ready to go home or start new treatments if they were needed.

“I would see any new admissions throughout the day and stabilise them. I would also go to the labour ward or operating theatre if there was a baby who needed help after delivery. I did on the job coaching and training with the nurses in the unit throughout the day and I also taught medical students in the afternoons through tutorials or lectures. We had a weekly meeting with the medical and nursing staff from the obstetric and paediatric departments where we would discuss any neonatal or maternal deaths. I would usually go home after nursing handover in the afternoon. I would get phone calls any time after that if there was a baby the staff were worried about and they wanted advice.”

Now based in Our Lady’s Children’s Hospital in Crumlin, Dr Walsh said it was great to see the progress in the neonatal unit over the six months. “The staff and students really progressed in their knowledge and skills and the number of babies admitted to the unit increased markedly. The mortality rate also fell.”

Aisling completed her placement there as a third year Paediatrics trainee at the Royal College of Physicians of Ireland. Her placement with VSO was part of her Out of Clinical Programme Experience. VSO, an international development organisation that works through volunteers to fight poverty in low income countries, is always seeking experienced teachers, and health professionals.