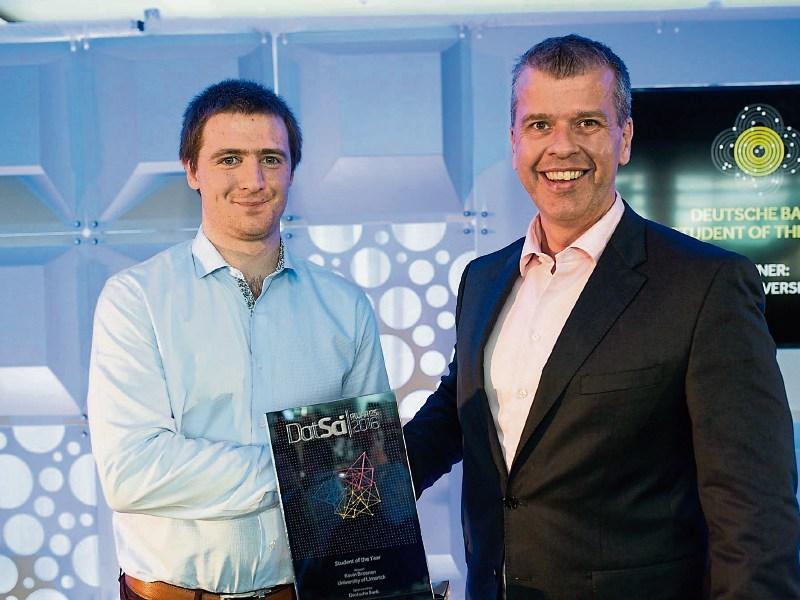 A UNIVERSITY of Limerick PhD student has been named student of the year in this year’s inaugural Data Science Awards.

Kevin Brosnan, of the Mathematics and Statistics Department at UL, entered the DatSci Awards as it was the first time Data Science has been celebrated in Ireland.

Mr Brosnan said he is passionate about developing new statistical techniques to address real life problems, and his PhD centres on ‘Data Analysis of Flow Cytometry data with inclusion of key biological knowledge’.

“The experience of the award ceremony offered me the opportunity to engage with an audience of data scientists, from both academia and industry, which until now have not been brought together in such a setting. This event has the opportunity to become the highlight event in the Data Science calendar in Ireland over the coming years,” he said.

Mr Brosnan said that he believes that data science will  become one of the most sought after professions in Ireland over the next five to 10 years. “As companies improve processes and insert additional probes and measuring devices, the data collected will need advanced data science tools for analysis. This analysis will provide companies and organisations with additional insights to optimise production processes in manufacturing, performance in elite sports and the detection and monitoring of disease in medical diagnostics,” he said.

He was up against students from NUI Maynooth, NUI Galway and Griffith College Dublin.

Over 200 people attended the ceremony at the Aviva Stadium, where twenty-one finalists were recognised for their contributions to the field of data science and technology.

Many of those celebrated are the emerging talent within the data science community.

“Until recently the value of data has not been recognised,” said Laura Kennedy, head of data science recruitment at Next Generation.

“However, businesses big and small are now moving into a digital age by harvesting this data and incorporating it into their decision making throughout their business. The DatSci Awards, we believe, will be one of the building blocks for Ireland to become the European Data Science Hub”.