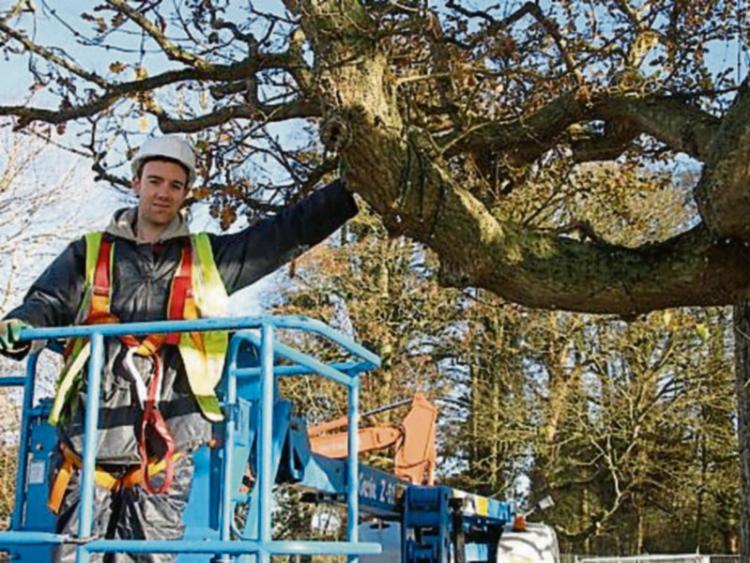 Shane Woods placing the last of 10,000 new bulbs on the memory tree at Milford before it was knocked down

A ‘BEAUTIFUL’ oak tree which grew on the grounds of Milford Care Centre for some 200 years is now making its way around the world.

Over the years, the tree became known as the Memory Tree, with thousands of lights gracing its branches in remembrance of loved ones.

However, the tree had to be cut down in 2013 due to internal rot.

Jim Rhatigan, head of therapy and social care services at Milford Care Centre, explained to the Limerick Chronicle that a decision was taken to donate the tree to the PALLS Project (Probation and Linkage in Limerick Scheme).

Primarily designated for people with a past criminal conviction, the project has been described as far more than a mere training course and is helping to change lives.

”The men have created the most fabulously handcrafted wooden bowls and other items that we are now giving as gifts to people so that they have something personal from Limerick to take with them,” he explained.

Milford Care Centre is hosting two international events on October 6 and 7. The first is the Making a Difference, Measuring the Difference conference on Thursday, October 6, followed by the Compassionate Cities International Summit on Friday.

The presenters over the two days are from Ireland, the UK, India, Spain and Australia. The International Compassionate Cities Summit is a day for the people to come together and interact with Milford’s Compassionate Communities Project. This project has touched the lives of many people in the Mid-West through its community Café Conversations, and the seed grants awarded to community initiatives that encourage people to talk more openly about illness, death and bereavement.

The summit is open to everyone, and promises to be an inspiring and interactive event. There will be music, art, plays, question and answers session, plus lunch will be provided.

The International Summit is supported by the All Ireland Institute for Hospice and Palliative Care, The Irish Cancer Society, Maynooth University and The Irish Hospice Foundation.