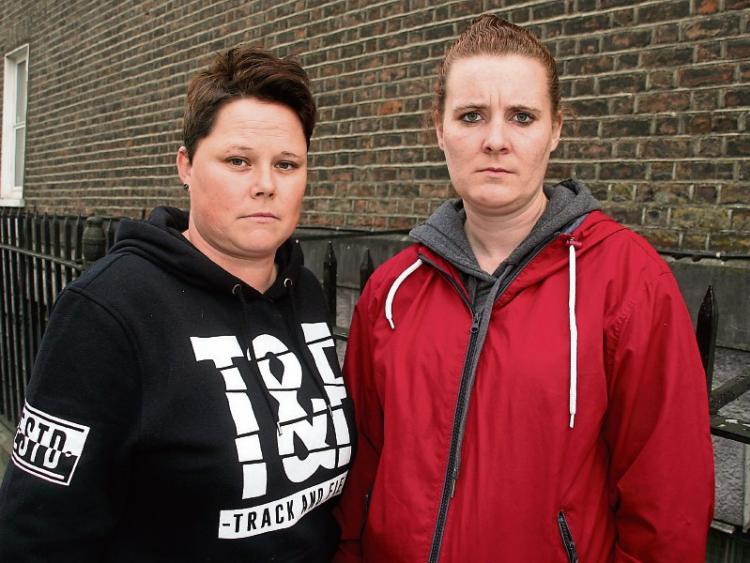 Dawn and Lisa O’Driscoll who claim they had to leave their home due to threats Picture: Adrian Butler

A LESBIAN couple have revealed that they were forced to flee their home in an estate in Limerick city due to repeated threats and intimidation over their sexuality after they became a couple.

The pair, who are both in their early 30s, told the Limerick Leader that they were threatened that they would be “burned out” of their home in an estate, which they do not wish to identify.

They were forced to leave their residence a year ago and now have received alternative accommodation through Thomond House, which provides a refuge for women who are at risk of becoming homeless.

However, the move has also led Lisa and Dawn O’Driscoll to be separated from Lisa’s five children – all boys – aged three, six, seven, nine and 12, who now live in a two-bed apartment with Lisa’s former partner.

The couple, who are both in receipt of disability allowance, are now desperately pleading with Limerick City and County Council to find them a suitable home, whereby they can live with the children.

“We had to leave our home over a year ago now. We suffered abuse. We were hit with stones, called faggots. We were told we would be burned out of our home, with my children inside. The boys were bullied, and one of them was even kicked in the stomach one day,” explained Lisa.

Lisa and Dawn have been together for two years and married in Limerick last year. “Only for Thomond House we wouldn’t have had anywhere to go,” she said.

“We had to leave suddenly as we were told we would be burned out of it that night. But the most I can take in the apartment overnight is two of the boys, under our contract, not all five of them. All I want is for the council to give us a house. We were in a three-bed house before and we managed.”

Limerick City and County Council said that it does not comment on individual cases, as it believes it is not appropriate to discuss the personal circumstances of any housing applicant publicly.

“The local authority makes every effort to house people who are on the housing waiting list in an efficient manner and in accordance with the provisions of national and local policies,” said a spokesperson.

It outlined that there are a broad range of options available for social housing, other than local authority houses. These include accessing the private rental market through such schemes as Housing Assistance Payment (HAP), Rental Accommodation Scheme (RAS), and long-term leasing.

There are currently 4,400 households on the housing waiting list.

“Private rented supply is at the lowest level in a decade. Rent supplement/HAP levels must be increased – they are unchanged since June 2013,” it says.

“Yet in the following two years, prices in the private rented sector increased by over 20%. The vast majority of private rented properties on the market - 95%, are beyond the reach of people who are in receipt of state support.”