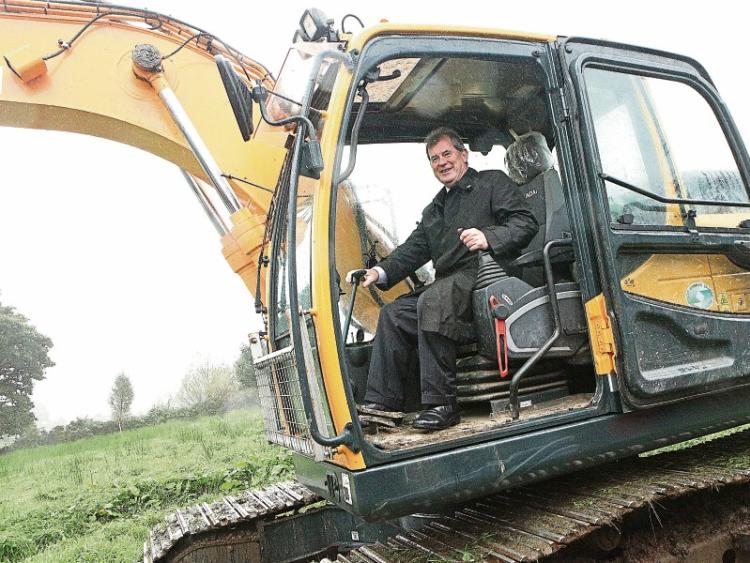 Back to how it all began: JP McManus still knows how to drive a digger as he demonstrated in Murroe Picture: Dave Gaynor

JP MCMANUS launched Murroe’s €700,000 field project by turning a sod with a spade - but he could easily have used the digger.

As a young man he worked with his father, who had a plant hire business. There are Limerick farmers, to this day, who can point to a ditch in a field and say, “JP dug that”. He has happy memories of coming to Murroe.

“I spent a long time in Glenstal Abbey with Fr Oliver, who was the farm manager. I remember a place called the Congo, we cleared a lot of scrub there - it seemed to go on forever!”

“There is great community spirit about here. I’m sure it is an example to many other communities and other areas and I would like to take an example from Murroe. There is no place or nothing that stands still, you are either going upwards or you are going down - there is no such thing as we’ll keep it at this level,” he has said.

They are certainly going upwards as planning permission has been granted for the €700,000 astro-turf pitch, walkway, multi-purpose building and skate park.

Sunday’s launch coincided with a vintage tractor run, hence the track machine Mr McManus is sitting in. Fr Simon Sleeman, chair of Murroe Community Council, said it was the most important day to date.

“We bought the six acre field with JP’s help for €130,000. The bank would only loan us €50,000 so he paid for it. We would have been fundraising to pay for it for the next 10 years. We wouldn’t be close to even thinking about starting.

“It was the first moment the community got to see the plans which we had up on a wall. If only it had stopped raining but as JP said to me it was even more impressive that so many people came out in the rain. The place was packed..

“JP has been hugely supportive and we are hugely grateful. And it is not just money, his presence is hugely affirming. It was a wonderful positive day with Pat Shortt and John Hayes as well. You couldn’t have a better line-up,” said Fr Simon.

Work will commence in the spring with a number of fundraisers in the pipeline. Mr McManus praised Murroe-Boher GAA, ladies gaelic football, camogie and soccer clubs for supporting the community training pitch, due to be completed in June.

See pages 4 and 21 for more coverage.