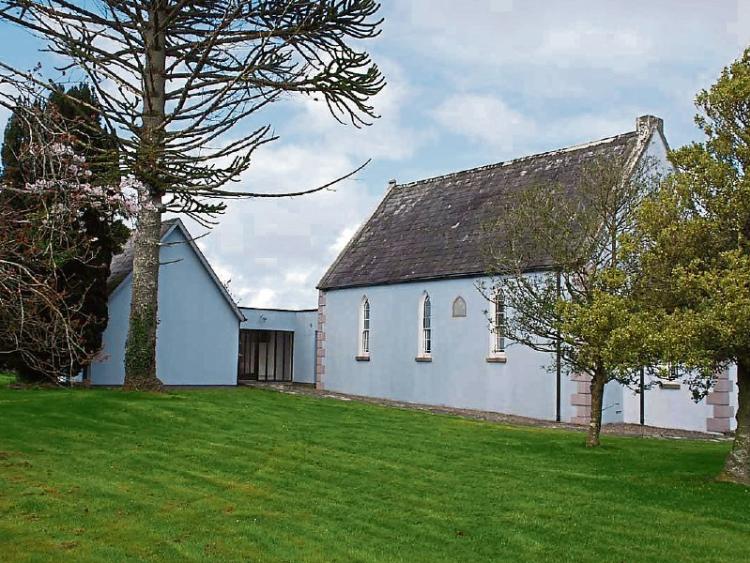 The Embury Heck Church in Ballingrane, outside Rathkeale was built in 1766 and later extended

MEMBERS of the Methodist community in West Limerick will be celebrating a milestone event this Saturday with the 250th anniversary of the building of the Embury Heck Church at Ballingrane, a few miles from Rathkeale.

And joining the local church members will be a group of people of Palatine descent from around the world who arrived in Rathkeale at the weekend for a ten-day tour exploring the sites and history of the Palatines in Ireland.

In 1709, 110 families arrived in Ireland, some of the many Protestant families who fled persecution from French military in the Palatinate in Southern Germany. Many  of these families were eventually settled on the Southwell estate lands around Rathkeale, at Courtmatrix, Killeheen and Ballingrane.

But, instead of the free land promised, rents increased for the new settlers and many were forced to emigrate, among them Philip Embury and Barbara Heck, both of whom had converted to Methodism, along with many fellow Palatines.

Philip Embury was born in Ballingrane in 1729 and converted to Methodism following a religious experience in 1752. A carpenter by trade, he became a lay preacher at his local chapel and married Margaret Switzer from Rathkeale. They set sail from the Customs House Dock in Limerick in 1760.

Also on the same emigrant boat was his cousin Barbara Ruckle, born in 1734 and now married to Paul Heck. In New York,  then a small city of just 14,000, Barbara  was dismayed by its spiritual carelessness and pleaded with her cousin Philip to preach.

According to reports handed down, he maintained he could not preach as he had neither church nor congregation.

But Barbara’s response was “Preach in your own home and I will gather a congregation.”

The first  gathering at which Philip preached had only five people. But eventually the congregation grew, and the first Methodist chapel was established in 1768 on the site of the present John St church, right in the heart of the business district.

Philip later moved to  Camden Valley, New York, where he continued to work at his trade during the week, and preached every Sunday.

He and several others had received a grant of 8,000 acres (32 km2) to develop for the manufacture of linen.

He organized among Irish emigrants at Ashgrove, near Camden Valley, the first Methodist society within the bounds of what became the flourishing and influential Troy Conference.

He died suddenly in 1775 as a result of a mowing accident.

Barbara and her husband, together with their five children, also left New York City for a farm in Camden but were forced off their land and moved to Montreal where Barbara again set about establishing a home for Methodism and founded the first congregation in Canada.

She died peacefully in 1804 with her bible in her lap.

Despite the fact that the woman from Ballingrane left no written record or letters of her missionary work, she is regarded today as one of the founders of Methodism in North America, along with Embury.

A pair of candlesticks which belonged to her are still lit every week in the John St church where they built the  first Methodist church.

And of course, neither Philip nor Barbara has been forgotten in their home place where the church, built in 1766 bears their names.

This Saturday, at 3pm, Rev Ruth Watt will lead the special ceremony and Rev Bill Mullally, President of the Methodist Church in Ireland will preach.