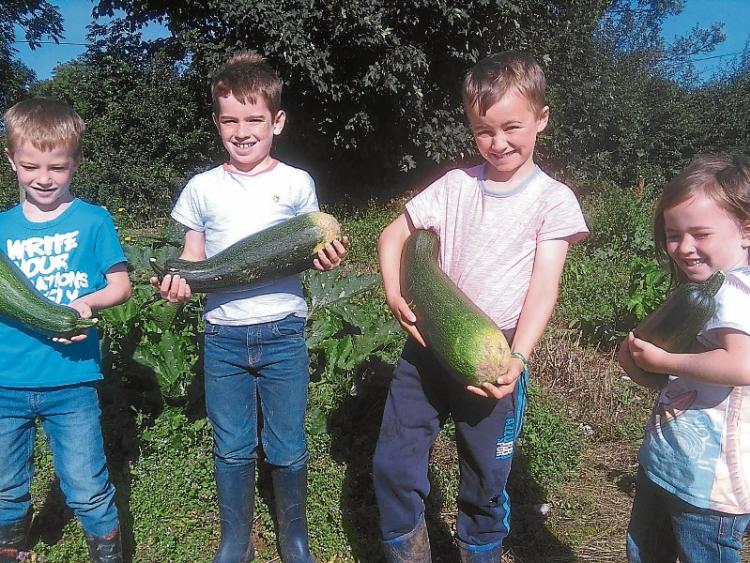 SOME in Dublin 4 may think farmers beyond the pale still eat bacon and cabbage three times a day but in the Murnane household in Meanus they dine on oven roasted courgettes sprinkled with feta cheese.

And why not when you can grow courgettes of this size and quality. Ger, wife Karen and their four children returned from a holiday to find their vegetable garden had grown out of all proportion in their absence.

In particular, their variety of cucurtbit – the same family as cucumber, squash and melon – was some of the biggest Ger had ever grown.

They are over 20 inches in length and weigh up to a hefty six and half pounds.

Or in this case a one child job as Garrett, aged almost nine, Cormac and Eoghan, twins aged seven, and Saoirse, four, are pictured shouldering their weight.

As many parents struggle to get their children to eat their greens, Ger and Karen have no such issues.

“The children are fascinated by the size of them - the ones in the shops are much smaller. We have four of five courgette plants.

“The children actually eat them raw. They eat raw carrots, celery and the courgettes,” said Ger, who was able to share the bountiful harvest with family members.

The green-fingered dairy farmer reveals the secret of his success to the Leader.

“I put farmyard manure and a bit of poultry manure in the garden.

“This year the weather was warmer. Even though it wasn’t sunnier, temperatures were higher and for longer. Plus you had the rain so growth-wise it has been a great summer,” said Ger.

Luckily, Karen is as good at cooking courgettes as Ger is at growing them.

“My wife likes baking and cooking and trying out new recipes. She started making cakes believe it or not,” said Ger.

“The very same as chocolate cakes but instead of chocolate she uses courgettes. They are very tasty and are especially good for the cholesterol,” said Ger.

And it is not just for dessert, the vegetables have been a savoury addition to the dinner table as well.

”She has stir-fried them and oven roasted them with feta cheese. We have to go to the shop to buy the feta cheese though,” laughs Ger, who is a huge Limerick hurling supporter.

He looked into entering the courgettes at Limerick Show but unfortunately they were too large.

“There is a dimension restriction. They have to be between six inches and nine inches and ours are over 20 inches,” he said.

But they are still best in show in the Murnane home.