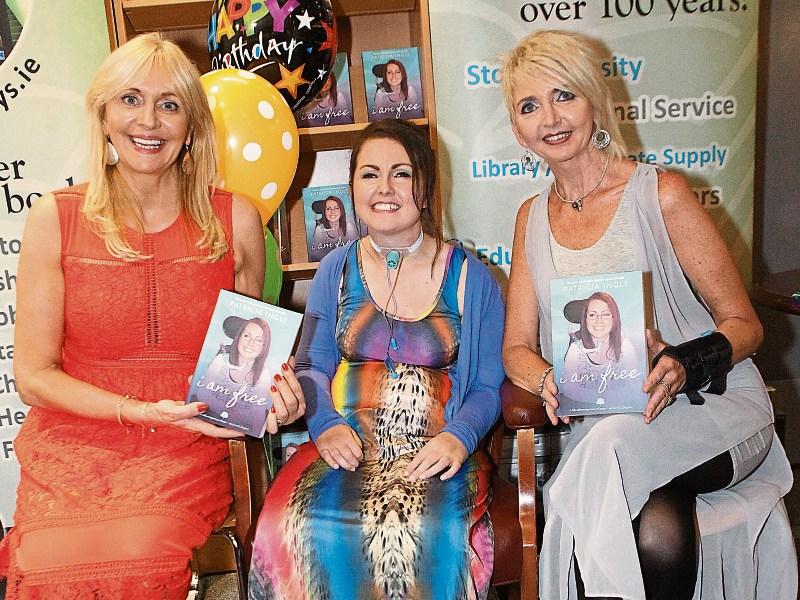 Patricia Ingle, Murroe, at the launch of her book I Am Free with Miriam O'Callaghan who officially launched the book and the ghost writer Mary Malone - Picture:Dave Gaynor

A LIMERICK woman who contracted a rare illness at her job in a pet store and spent more than 1,000 days in hospital has written a book about her experience.

I Am Free by Patricia Ingle was launched in O’Mahony’s bookstore on Monday by broadcaster Miriam O’Callaghan.

Patricia, 28, was left paralysed and brain damaged after contracting a disease in 2008, just a week shy of her 20th birthday.

The illness has had an extreme effect on Patricia’s quality of life — she is now fed through a tube, uses a speaking valve and relies on a ventilator at night.

Patricia’s father Pat said that the book was one of Patricia’s three goals after emerging from hospital; her two other goals were to have a party and build a house.

He recalled that she had been in an intensive trauma unit in Cork on her 20th birthday, which made her 28th birthday on Tuesday all the more special.

“We are very very proud. It’s unbelievable, the stuff that we went through. It’s an emotional day,” he said.

Patricia’s mother Annette said: “We are just so happy to have her here with us — she still has her problems, but she’s overcoming them.”

The book was written with the assistance of ghostwriter Mary Malone, who thanked the Ingle family for their trust. Mother Annette said that the book has been in the works for almost two years, with the whole family contributing to the story.

Ms O’Callaghan said that she was honoured to be launching the book, and that more people should know about Patricia’s story.

“I heard about it on my radio show, and I found it quite inspirational that a young woman had been through this extraordinarily difficult experience and came out the other side to be so inspiring, so I came down and interviewed her in her home about a year ago,” she said.

Patricia contracted the disease from inhaling dust from the faeces of parrots who were infected with chlamydia psittacosis while working at a pet shop on the Ennis Road.

She then spent almost three years in hospital.

In 2011, after a lengthy legal battle, the high court awarded Ms Ingle €7.5m over her lifetime.

Her solicitor Susie Elliott spoke warmly of Patricia’s determination over the past eight years.

“As a lawyer, you’re supposed to be detached, but it is difficult to stay detached when you’ve got this remarkable human story, an incredible tragedy as to the injury that Patricia suffered,” she said.

“It was a difficult time, but every step of the way she was determined. I would have thought when I first met Patricia that getting any answers would be close enough to impossible, but it wasn’t for her.”

Several people at the launch commented on Patricia’s smile, a constant throughout her ordeal.

“There have been very hard times, but it’s easy with Patricia because the smile says everything,” her dad said.

Annette said that “it’s a sad book but a happy book too”.

At the launch, Patricia sincerely thanked all of her family and friends for their constant support in the writing of the book.