Harvester bursts into flames while working on Limerick farm 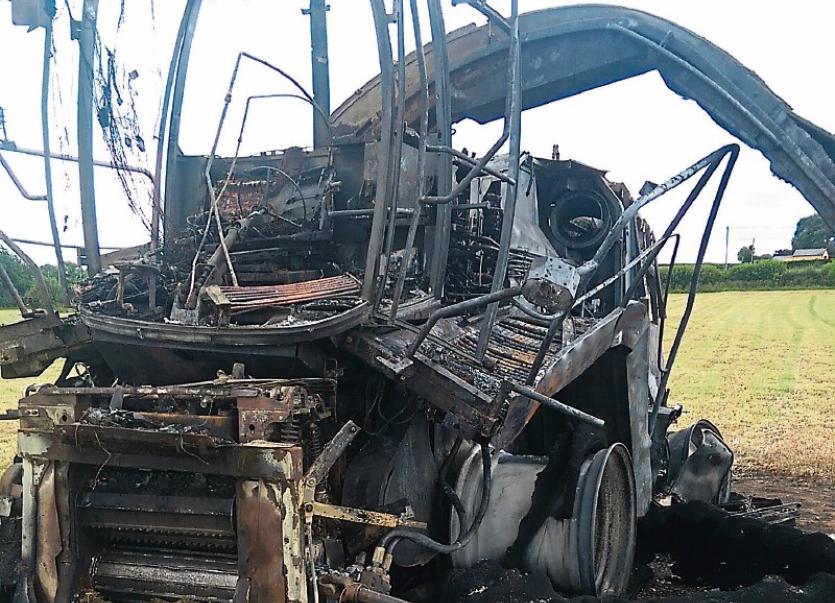 Lucky escape: A photograph of the burnt-out harvester sent in by a Limerick Leader reader

A COUNTY Limerick agricultural contractor had a very narrow escape when the harvester he was driving suddenly burst into flames.

The freak incident occurred last week in a field adjacent to the R519 Balingarry Road out of Adare.

As the destroyed harvester is next to the road a passing motorist saw it, stopped, took a photo and send it into the Limerick Leader.

“I couldn’t believe what I was seeing. It looks like something you would see in a Hollywood action movie. It is burnt to a crisp. I’m not sure how it happened,” he said.

The Leader contacted then the contractor, who didn’t wish to be named.

“I was harvesting whole crop wheat last Saturday week. Smoke started coming from the back of the machine. It went up very quick.

“I tried to stop it but it got out of control. Anything can go up on fire,” he said.

It is understood that the value of the self-propelled harvester is estimated to be around the quarter of a million euros mark. The fire brigade was called and a unit was on the scene within minutes to quench the blaze.

It is believed that there were a number of blasts when the cab, tyres and diesel tank exploded. Smoke billowing from the fire could be seen for miles around and the heat was supposed to be ferocious. The hot day and warm breeze fanned the flames.

And while the loss of a harvester has caused the contractor a considerable amount of hardship at a busy time of year it could have been a much more serious incident and, thankfully, no one was hurt in the rare occurrence.