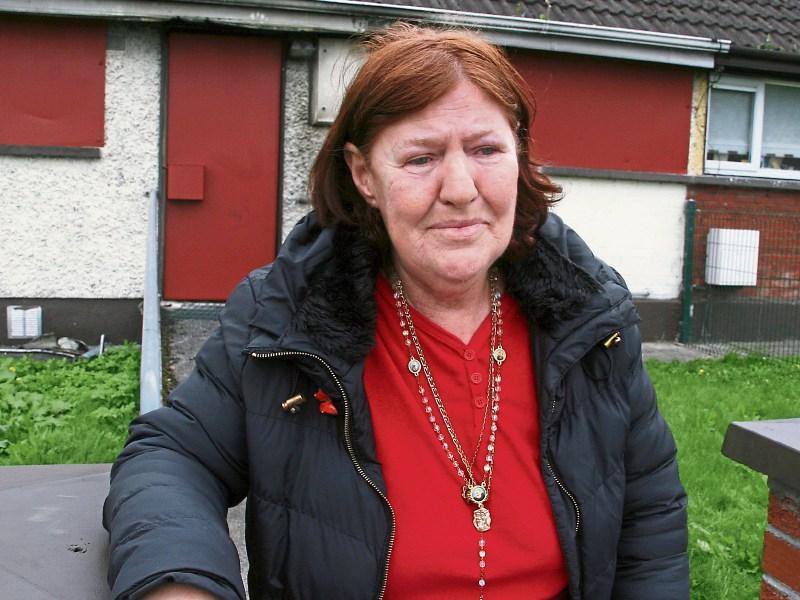 A GRANDMOTHER has lost some of her most treasured family possessions after a fire in her home on the northside.

Mother-of-two and grandmother-of-three Christina Hughes woke up at 6am to use the toilet and found the blaze ripping through her bungalow in De Valera Park, Thomondgate.

Her asthmatic husband William was rushed to hospital suffering from smoke inhalation after the fire brigade rescued him, Christina and her beloved pet dog Missy.

“I saw a big bright light. I knew it wasn’t my hall-light. It was just so shocking,” she said, “My husband William was sat in the kitchen, so he suffered the worst. He had taken all the smoke in.”

Christina – who feels “devastated and traumatised” following the ordeal, has seen pictures of her children Kenneth and Helena, and her grandchildren David, 14, Rhys, 9 and Brooke, 1, destroyed in the inferno.

And a shrine which her husband created to his parents Mick and Helen has also been destroyed.

“This is stuff I really treasured, and it is all gone,” she said, struggling to hold back tears, “Willie’s mother and father Mick and Helen who are in heaven, we had a holy crucifix at night in memory of them. Those were the only copies [of the pictures] I had.”

She added that all her grandchildren’s confirmation pictures had been destroyed, saying: “Little David made his confirmation only recently, and I had so many nice pictures of him.”

In the short term, she is sleeping at her only son’s house in nearby Ballynanty.

“I am still shaking from this: I cannot eat. I am crying, and my son is telling me not to cry, as it is making him worse than what I am,” said Christina, who is taking multiple tablets for a heart condition, depression and to aid her sleep.

She will visit Limerick City and County Council’s offices today in the hope of being re-housed from the bungalow she had occupied for the last four years.

“Some things can be replaced – not the pictures though. My life is the main thing though, the fact I got out,” Christina added.

It is unclear how the blaze started last Tuesday morning, but the Limerick Leader understands the gardai are investigating reports that it may have been arson.

Local Independent councillor Frankie Daly – who will accompany Christina to City Hall today – says he will be monitoring the investigation closely.

“It is very distressing to see a local woman like this in such stress. I am just hoping and praying the gardai and the other authorities get to the bottom of what has caused this. It is upsetting from Christina’s point of view, and her husbands. There are a lot of question marks, and I just hope the gardai can get to the bottom of this. Christina was just in bed and to wake up to this is just horrific,” Cllr Daly said.

Anyone with information about the fire is asked to contact Mayorstone Gardai at 061-456980.