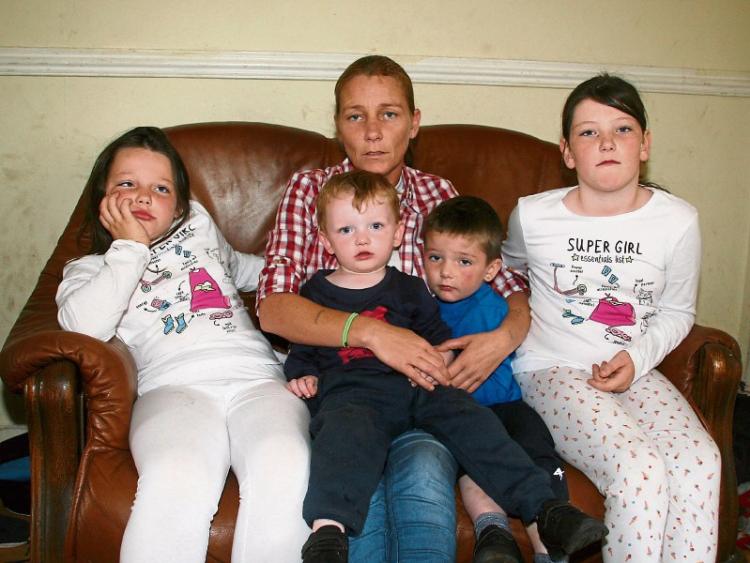 A MOTHER of four young children who claims she was forced to leave her home in Limerick after it was attacked by a gang of youths says she is paying €50 a day on taxis to get her children to school.

Mary O’Callaghan, 35, who moved out of her rented-home in Emly more than a week ago, has been living with her sister in St Mary’s Park in the city since the weekend.

Leanne O’Callaghan, who has three children of her own, is living with her partner in a two-bedromed council house at St Brendan Street.

“​I have my own three kids but I still took the five of them in because I wouldn’t leave them out on the street,” Leanne told the Limerick Leader at her home this week.

Mary, who is originally from Southill, says a number of windows at her home in Emly were smashed and the front door kicked in by a group of up to 13 youths.

She believes the attack was related to another incident which happened around Easter following which she and an older daughter were arrested.

Gardai at Tipperary Town declined to comment on the matter saying all queries should be made to the Garda Press Office.

Mary says she has been on the social housing list in Limerick for over a decade and has been in contact with a number of housing agencies since moving out of her home.

She spend a number of nights in hotels – at her own expense – before moving in with her sister as she could not secure alternative accommodation.

“I would like the homeless to take notice and see that I actually have nowhere to go and I have nothing to do,” she said. “​It’s been heartbreaking - all I have been doing is crying – nobody is helping me,” she added.

Two of her children – Martina (9) and Alicia (10) – returned to Scoil Íosagáin, Hospital on Tuesday morning following the summer holidays and as Mary’s does not currently have a car, she says she has been travelling to the school in a taxi each morning.

When asked if she would consider returning to the house in Emly she replied: “It’s unlivable and I’m afraid to go back because if I do it will be burned to the ground.”

However, he added that anyone on the housing list whose circumstances change should inform the council as soon as possible.