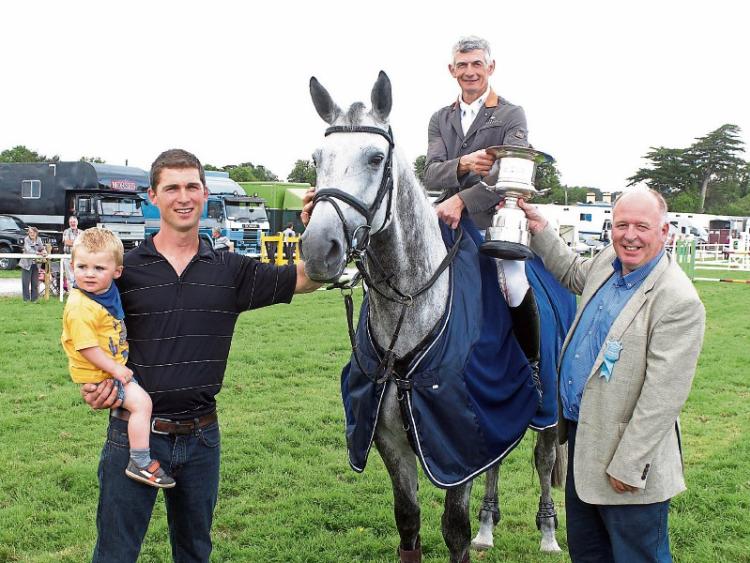 AT THE 2015 Limerick Show the car-park was full of mums and dads sorting out jackets, wellies, umbrellas and buggies with rain covers as the sky darkened around them.

A year on and there was barely a cloud in the sky over the Racecourse. Parents slathered their offspring in sun cream and they were off. Organisers have put a big emphasis on making a it family day and “record crowds” with well over the expected 15,000 attending.

You can’t miss the bouncy castles and attractions on the walk in, neither could you miss the nine-foot tall stilt walker called Mr Shorty - a new addition this year who put on a circus skills workshop. He came all the way from Mayo – pretty quickly I imagine with his giant stride – for his first Limerick Show.

“It is very well organised, there’s a fantastic crowd and the weather is gorgeous,” said Mr Shorty. And that is the long and the short of it, shows are dependent on whether it rains or shines.

Cheers are echoing over from the show jumping arena where a Ukranian cossack rider is putting on a display. He uses his feet to hold on while his hands touch the grass, stands upside down on the saddle and even goes under the animal’s belly.  A flying dismount, that Frankie Dettori would be proud of, finishes the routine.

Carmel McCarthy, who runs it, said they had a huge entry of around 75 canines. The overall winner was Natalie Zbroja’s, Raheen, Standard Poodle but the most touching story was in the best rescue category.

“Ollie was rescued by Sandra Larsen after six pups were thrown in the Shannon. He was the only surviving one. It’s incredible what she did,” said Carmel.

Shows can only continue with sponsors like Donncha Houlihan, partner in the equine hospital with his brother Paul.

The former Ardscoil Ris pupil – son of the late Donie Houlihan who taught maths there for over 30 years - only opened the clinic on the grounds of Greenmount House Stud, once owned by Lord Harrington, at the edge of the Racecourse in January 2015. It quickly grew into an equine hospital with full operating theatre and is the only one between south Tipperary and the Curragh. At Limerick Show they were showcasing their dynamic scope – one of only three in the country. Considering the show’s horse showing and jumping tradition, and Patrickswell location it is a perfect link-up with Greenmount Equine Hospital.

Limerick Show goes back generations and the love for it is passed through them. Young Ben and Harry Buckley, Crecora, are a perfect example. Ben, aged nine, and Harry, seven, took part in the show jumping on Saturday and entered the rock, bog and novel garden in the horticulture section on Sunday.

“I had four clear rounds and Harry had three,” said Ben, who proudly shows the Leader his first place rosette for his garden, while Harry is equally chuffed with his highly commended.

“It took around two hours,” said Ben. Harry chips in, “We used rock, compost, sea shells and leaves to make the garden”. They were with their grandmother Mary Buckley who won the inside and out competition with a contemporary design featuring roses and glass.

Mark Geary, Clarina, won the country garden with his entry of carrots, onions, shallots, squash, beetroot, three different types of potato, cabbage and herbs. The Leader featured a story during the summer about Ardpatrick being “plagued by rabbits” and the same goes for Clarina.

“They are everywhere. I moved a lot of my vegetables into a glasshouse due to the rabbits and used raised beds,” said Mark, who credits his late mother, Margaret – a fantastic gardener – for passing on her green fingers to him. Best in show for the 14th time was Tony Mackessy, Adare. Whatever the weather Tony always comes out on top at Limerick Show!