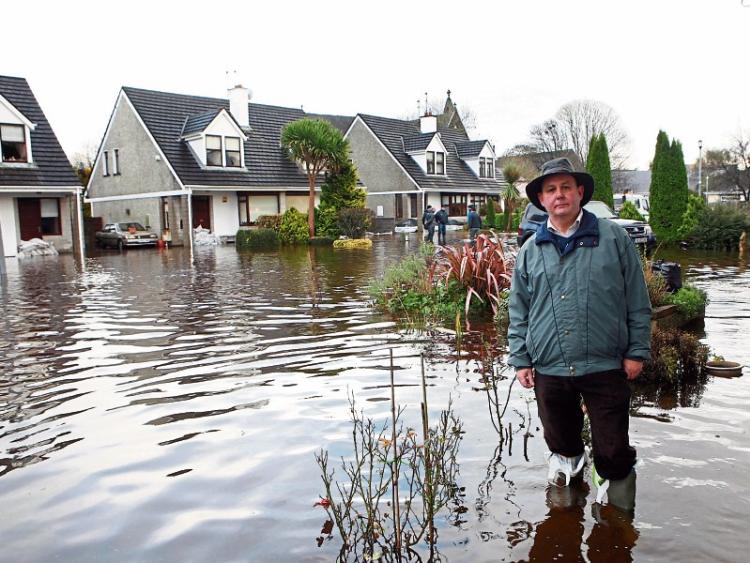 Brendan Murphy and his family had to leave their home in Meadowbrook, Castleconnell for four months. He is urging people to attend the public meeting Picture: Press 22

A CASTLECONNELL resident, whose house was flooded, has branded a draft plan that states “there is no flood risk to any properties” in the village as “ludicrous”.

Brendan Murphy is pictured in 2009 in Meadownbrook estate in Castleconnell. The draft flood risk management plan was published in July but its details have only come to locals’ attention in the last week ahead of a public consultation day in the Castle Oaks House Hotel today - Thursday, September 1 from 2pm to 7.30pm.

Mr Murphy is calling on fellow home and business owners to attend and if they can’t to email a submission before the deadline of September 23.

In the draft plan, under Castleconnell, it states: “There is no flood risk to any properties in the area of further assessment (AFA) for the 1% annual exceedance probability (AEP) fluvial coastal event.

“There are not sufficient present value (PV) damages to promote any flood risk management measures for this AFA.

“Therefore, no optioneering has been carried out. Providing protection to the 0.1% standard of protection was considered. To protect the cluster of houses in the south of the town would require an embankment approximately 95m long and 1m high, costing at least €42,000. As there are insufficient PV damages to promote this measure in the AFA this was not considered any further.”

When Mr Murphy read that he said: “I was horrified, I just couldn’t believe it. I’ve been emailing during the year, asking them is there any progress, what is happening, what plans are afoot? The temporary measures last December and January were quite good but that is what they are - temporary,  so what are your permanent plans? And they produce a report which suddenly says there are no issues in Castleconnell for businesses or residents. It is unbelievable, it is as if they just bypassed us.”

Mr Murphy will be attending this Thursday, September 1, and will be bringing photos of his house which was flooded in 2009.

“I’ll be saying what’s this – are there no issues in Castleconnell, please explain. The whole house was flooded. We were out of it for four months. We had to gut the whole house, we had to take off all the wood work, all the floors, the doors came off, we had to take the plaster off the walls, it was foul water that was in the house,” said Mr Murphy.

Last December and January he had a pump going for five weeks to keep the rising waters at bay.

”You could argue it was difficult to sleep at night because of the noise but on the other hand it was reassurance that it was still running. It worked but what if we don’t get those pumps again or what if they are deemed to be needed somewhere else.

“I would be worried about temporary measures. They did the job last winter but there is no point saying it is going to happen every 100 years and let the next generation take care of it - it has happened twice in the last six years. All those temporary measures must be costing a lot of money - all the sand bags, pumps and hours worked by council staff over the turn of the year. Surely you set that against a permanent solution to the problem.

“It is just mind boggling they can come out with a report that says there are no flooding issues for businesses and residents in Castleconnell,” said Mr Murphy, who is calling for as many as locals as possible to voice their concerns at this Thursday’s meeting or email their views to draftplans@opw.ie before September 23.

Senator Kieran O’Donnell has sent a newsletter to locals encouraging as many as possible to attend.

“Unbelievably, I found that the current draft OPW flood plans do not include any flood relief measures for Castleconnell village. This is on the basis that the OPW appear to have made a grossly inaccurate assessment that no residential or business properties are at risk of flooding here.

”We know this is clearly not the case as seen from the floods in recent times. We need to set the record straight with first-hand knowledge and get the plans changed to reflect the urgent need for flood relief measures in Castleconnell village,” said Senator O’Donnell.